Haku Kamaka (Jpn: 釜火白) was a suspect in the murder investigation of "weird guy" Randolph in No Place Like Home (Case #45 of Pacific Bay).

Haku is a 28-year-old SFAL Researcher. He has black hair and wears a lab coat with a black shirt underneath and wears round-shaped glasses, a phone earpiece on his right ear, his right pocket has an alien pencil and wears an SFAL badge. It is known that Haku eats candy, had read Truth About Aliens and has allergies.

Haku was called into the investigation after Amy and the player found a photograph of him and the victim in the SFAL Radar Field.

Amy started the conversation by asking Haku about the photograph and he stated that Randolph was SFAL's little starman. He was not entirely convinced that he was an alien, but he helped him send a message to his home planet of Krep-9 anyway. He went on to say that the message will not reach the planet for years to come. Amy was surprised to hear that Krep-9 is an actual planet, but Haku said that Randolph would not be here to get the message regardless.

Haku was due to another interrogation when the team found out that he actually believed that Randolph was an alien via a video he put on his phone. It was denied at first, but he replied saying that he would not hurt him just so he could stay on earth. He also said that according to some data he acquired, aliens from Krep-9 would be coming to earth. Haku requested to the team to inform the aliens he helped find Randolph's killer as he hoped they would take him with them.

Haku was proven innocent when Dr. Jarvis Donne was found guilty for autopsying Randolph, but he played a major role in helping Randolph return home. After discovering Randolph was not dead and was an alien, Amy and the player went to Haku to find a place for Randolph's alien friends to land. He suggested they land on the satellite field where it would be discreet and big enough for them to land. He also said they need a light source so they can land safely. After gathering some lights from the fairground and arranging them to let the aliens know it is safe to land, they were given to Haku so he could create a landing strip. And just before Randolph had to leave for Krep-9, Haku showed up at the station to inform Randolph of a meteor shower in the vicinity of Mars. Due to this, he recalculated the ship's trajectory so he could stay on course to Krep-9. Randolph thanked him for his help, and Haku thanked him back for proving that aliens do exist. 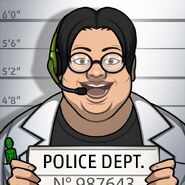 Retrieved from "https://criminalcasegame.fandom.com/wiki/Haku_Kamaka?oldid=469421"
Community content is available under CC-BY-SA unless otherwise noted.