Gwen Stanford was a suspect in the murder investigation of her father, reenactment actor Joe Stanford, in Open Wounds (Case #20 of Pacific Bay).

Gwen is a 16-year-old teenager with blonde hair and brown eyes. She wears pink, round earrings, a sooted nurse cap and a navy cloak with a medical badge on it. She sports a silver dolphin necklace and a blue pinstripe t-shirt with overalls which she wears a cotton flower upon. It is known that Gwen drinks mint julep.

Gwen found herself in trouble after Frank and the player found a locked phone in which the player code-cracked the device only for Gwen to scream in anger. Gwen took time to tell the team that her dad took her cell phone away but the player wanted to inform Gwen about Joe being murdered in the American Civil War reenactment stage in which Gwen didn't take the news well. Gwen told Frank and the player that she had a fight with her dad about her cell phone, as she needed her cell phone to keep connected to Friendnet, much to Gwen having beliefs that Joe loved the reenactment stage more than her.

Gwen found herself in more trouble after Hannah found out she had used her dad's credit card to purchase junk food at the Cannonball Saloon. Gwen proved to be a drama-queen during her second discussion with Frank and the player as she was not pleased about her dad imposing a strict diet on her person--she was to eat bean and rice rations, wear 1860's clothing, have no electricity, use no cell phones, have no Friendnet, eat no junk food, drink no mint juleps, even have no modern-day scenery--driving Gwen over the line.

Gwen's discontent with her father's lifestyle had nothing to do with the murder when the killer was impounded for grand homicide. 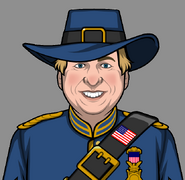 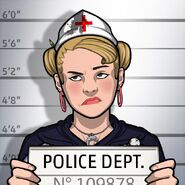 Retrieved from "https://criminalcasegame.fandom.com/wiki/Gwen_Stanford?oldid=514156"
Community content is available under CC-BY-SA unless otherwise noted.