Gustavo Salamanca was a suspect in the murder investigation of delivery truck driver Manny Sanchez in Crystal Death (Case #42 of Pacific Bay).

Gustavo is a 45-year old businessman who is the owner of the restaurant Tacos Niños. He wears a goldish-orange suit above a salad green shirt and a red tie with a Tacos Niños badge on his left side. He wears a sombrero and has burn marks on his left cheek. It is known that Gustavo drinks tequila, speaks Spanish and watches soccer.

The player and Frank were first led to Gustavo after finding a car door with the Tacos Niños symbol on it. He explained that one of his delivery drivers and his truck have suspiciously gone missing. When Frank explained the whereabouts of the truck and showed the victim, Gustavo identified him as his employee Manny Sanchez. He was surprised to hear of the truck's whereabouts as Manny normally goes through border control to get fresh ingredients, and that was nowhere near the train tracks.

Gustavo was interrogated once again after finding crystal meth in a Tacos Niños food tub. Frank threatened Mr. Salamanca for possibly being involved in Manny's drug trade, but Gustavo said that he was aware and that he fired him on the spot. He was nervous if anyone had caught Manny, since it could cost him his businesses. Frank was suspicious since the last time they spoke with Gustavo, he said Manny was his employee and that he and the truck were just missing.

Gustavo was found innocent of Manny's murder when Timothy Chubbles was found guilty of grand manslaughter, but with some hints from Tiffany Dunn, the player and Frank investigated into Manny's drug trade for more details on who he was really working for. When investigating the meth lab, they managed to find a delivery order from Tacos Niños with a strange message on it. After Hannah analyzed the order, she found that Tacos Niños made more money than their actual restaurant sales said. This led the team to suspect money laundering was involved, as well as Manny's drug trade. After reaching the conclusion that the meth was being delivered for Tacos Niños, the player and Frank left to arrest Gustavo for being involved with the drug trade. He denied it at first, but after being presented with proof of his crimes he finally admitted to it, and was arrested on the spot. 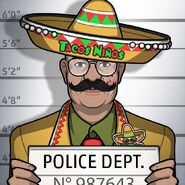 Retrieved from "https://criminalcasegame.fandom.com/wiki/Gustavo_Salamanca?oldid=538050"
Community content is available under CC-BY-SA unless otherwise noted.