Gus Smiffel was a suspect in the murder investigation of architect Norah Barnlow in Breaking the Glass Ceiling (Case #13 of Mysteries of the Past).

Gus is a 27-year-old construction worker. He has short brown hair and freckles. He wears a caramel brown shirt with a small dark blue scarf under a red coat. Additionally, he wears a light gray apron with a screwdriver, a red Wixon CC pencil, and a wrench. It is known that Gus is right handed, wears working boots and has a fear of heights.

Gus became a suspect after Maddie and the player found his hard hat inside the Crystal Palace, meaning that he must have been working on it with the victim. When informed of the murder, Gus was shocked and thought that this meant that the Crystal Palace wasn't going to be finished. He said that all the hard work would be for nothing and that the palace was supposed to be Norah's legacy and his and that he wanted to show it to his grandchildren one day. When asked if he knew anyone who would hurt her, he said that he had no clue as she was the boss and he was only a labourer.

He was spoken to again after Charles had stumbled upon a broadcast signal telling the workers to pull down the Crystal Palace. He was leading a crowd of protesting labourers to tear down the palace. After the protesters left, Maddie spoke to Gus about why he wanted to take it down. Gus said that he had done everything to work on the project and thought it was an honor, but would tear it down because of the changes Norah made to finish the project. She had asked the workers to cut corners and make them do a badly done job to get it finished.

Gus was later found innocent after Henrietta Vanderbilt was found guilty of Norah's murder but had to be spoken to again by Justin Lawson for him and the other labourers to relaunch the construction of the Crystal Palace. Justin and the player searched the palace and found a modified blueprint that, according to Nicholas Holloway, made the structure unsafe. After getting advice from Nicholas about the blueprint, Gus thanked the player for their help and continued the construction. 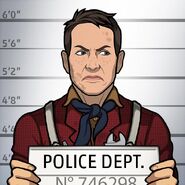 Retrieved from "https://criminalcasegame.fandom.com/wiki/Gus_Smiffel?oldid=502051"
Community content is available under CC-BY-SA unless otherwise noted.