Guruji (Hin: गुरुजी) was a suspect in the murder investigation of yoga teacher Scott Morris in Downward-Facing Dead (Case #17 of The Conspiracy).

Guruji is the 75-year-old founder of The Shala, a yoga studio. He has gray hair, brown eyes, and notable aging wrinkles. He wears a red robe with yellow linings over a white T-shirt. He is also seen wearing two different necklaces, one of them being a necklace that consists of brown beads as well a red tassel and the other being a necklace with white beads. It is known that Guruji is right handed, reads the Bhagavad Gita and drinks chai tea.

Guruji was spoken to again about his unflattering notes on the victim. He admitted that he feared that Scott was straying from his path because of his freethinking nature. However, he revealed that Scott had died before his karma grew too sullied, which would allow him to be reborn into a better form.

Guruji was found to be innocent after the team incarcerated Max Gaynes for Scott's murder. He was later consulted by Jones and the player about how yoga could ease the stress of Zoe Kusama, Jones's recently-found girlfriend. He advised them to try a mind-stimulating form of yoga called yoga nidra and told them to search the studio for a book on the subject. After finding the book, Guruji advised the two to look for a CD that would help them with the class. 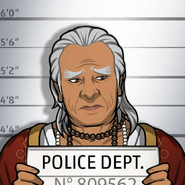 Retrieved from "https://criminalcasegame.fandom.com/wiki/Guruji?oldid=411922"
Community content is available under CC-BY-SA unless otherwise noted.