Gunther Fritz was a suspect in the murder investigation of movie star Hans Vogel in Auf Wieder-Slain (Case #3 of World Edition).

Gunther is a 55-year-old nude tourist. He has graying brown hair and a mustache. Being a nudist, he does not wear anything apart from the Oktoberfest golden pass around his neck and the green hat atop his head. He has face paint of the colors of the German flag, and a tattoo on his left arm that says "Gunther tag" with a mustache on top. Besides that, it is known that Gunther drinks beer and had military training.

Gunther was first interrogated after the player and Carmen identified him on a picture of him and a cardboard cutout of the victim. He was surprised to hear of Hans' murder, and said that he was at the Oktoberfest beer hall the previous day; however, he did not pay any attention due to him preparing for the sausage contest. This prompted the team to investigate the beer hall for more evidence.

Gunther was interrogated again after finding another picture of him and the victim in a sausage eating contest. He felt humiliated when the victim beat him at his own game. When Carmen suggested he killed Hans because of his humiliation, he said he did not but he could have if he wanted to thanks to his military training.

Gunther was found to be innocent after the team incarcerated Johan Schnee for Hans' murder. 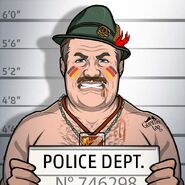 Retrieved from "https://criminalcasegame.fandom.com/wiki/Gunther_Fritz?oldid=408348"
Community content is available under CC-BY-SA unless otherwise noted.