Guadalupe "Lulu" del Prado was the killer of lawyer Stella Ziarati in Stonewalled (Case #8 of The Conspiracy).

Guadalupe is a 34-year-old socialite. She has brown eyes and long blonde hair. She wears a black tank top under a lavender jacket lined with plum fur. She also sports large, silver hoop earrings, orange eyeshadow, and has two beauty marks; one under her left eye and one above her left breast. Additionally, she is seen carrying Plopsie, her pet pug, who wears a silver collar with a red heart tag, with her right arm. It is known that Guadalupe drinks Bendrick's gin, uses Crème de la Terre and has manicures.

After investigating the Grimsborough Library, the team found a missing poster instructing to contact Guadalupe if Stella was found. Due to Stella's murder, she became a suspect. Saddened by the news, Guadalupe stated that she and Stella were best friends, and she was devastated when she went missing.

Later, they found a post of Guadalupe on Buzzer from four years ago that tagged Stella. However, Cathy stated that she had messaged the victim soon after, saying she set her up to humiliate herself at a job interview. When asked about this, Guadalupe explained that Stella had filled out a job application for her. However, Stella's report was too detailed for Guadalupe's interest, and she ended up screwing up the interview and not getting the job.

In the end, Guadalupe was incriminated for the murder. Upon admitting to the murder, she said that Stella tried to prosecute her family, but she did not reveal why her family was getting prosecuted. Wanting to protect her family, Guadalupe bashed Stella's head with her law award repeatedly after getting invited to redecorate her penthouse. Guadalupe then spent the rest of the afternoon building a wall around her body. Judge Powell sentenced Guadalupe to 17 years in prison for the murder.

After her trial, Gloria and the player discovered that Guadalupe's father was actually Pablo del Prado, AKA Pablo el Loco, a notorious Luzaguayan drug lord running a worldwide drug cartel. Stella was building a case against Pablo, leading Guadalupe to murder her. 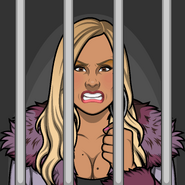 Guadalupe, sentenced to 17 years in prison for the murder of Stella Ziarati. 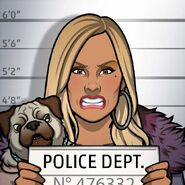 Retrieved from "https://criminalcasegame.fandom.com/wiki/Guadalupe_del_Prado?oldid=461146"
Community content is available under CC-BY-SA unless otherwise noted.