The Grimsborough Police Department acts as the primary law enforcement agency in the city of Grimsborough, making its appearance in the first and fifth seasons of Criminal Case.

The Grimsborough PD investigates murders in the city of Grimsborough, searching crime scenes for clues, interviewing witnesses and suspects, and carefully analyzing evidence in order to progress. After gaining all the criteria, the force is able to apprehend the actual killer behind the murder and put them behind bars.

Fifteen people, including the player character, have acted as key members of the Grimsborough PD over the course of the game, with each of them assigned a particular job:

Additionally, a few characters have been introduced as members of the police, but do not play as large a role. These characters include:

The player made their debut in solving a murder at the entrance of town. Whilst investigating, the player met the most of the team members, the last of them being Ramirez, who met the player while informing that a victim's mother was ready for questioning.

After securing the annual Dog Pageant by arresting its contestant Margaret Littlewood for poisoning the other contestants' dogs (with Jones being poisoned as well), the team was re-promoted to the University. There, the team would investigate a serial killer, "The Rorschach Reaper", who was known to hypnotize three people to commit murders. The investigation of the serial killer peaked during the University Prom Ball, in which prom queen Madison Springer was murdered. The team would unmask student Tess Goodwin as the killer and by extension, the Rorschach Reaper — all orchestrated to hypnotize Jones into killing the player. Just as Jones pointed his gun while hypnotized, Ramirez hit him to wake him up, allowing the player to arrest her. As such, the Mayor promoted the team once again to Maple Heights.

Meanwhile, Chief King's granddaughter, Cathy (under the alias "The @rtist"), started assisting the team in their investigations, much to his disapproval.

Chief King's betrayal and bringing down the Crimson Order

During the mayoral election day, they found socialite Adam Bentley shot to death, arresting Chief King for his murder. Unfortunately, he committed suicide before the team could ask him about his motive. After attending his funeral, Stuart Huckabee, the Chief's old friend, asked the team to go to the natural harbor to "dig the truth" behind the murders happening in the city, only to be found murdered hours later. Throughout his murder investigation, the team found out the existence of The Crimson Order, a secret society "controlling" the whole city with murdering those who revealed their secrets, including Stuart. To the team's shock, they found out that King was a member of the Crimson Order since he erased all his investigations on the society.

After solving a murder at the Aloki settlement (with Ramirez being held captive by Keanu Ashokan), the team found out that King was involved in the arson carried out ten years ago by the Crimson Order at the settlement since he never reported of the loss of his knife used in the arson. The team hypothesized that the Crimson Order had done it to prevent the Aloki Indian from getting more land, explaining why King denied filing the Aloki's complaint.

The team would investigate two murders committed by the Crimson Order, including escaped convict Tess Goodwin's. Afterward, the team discovered that King was actually manipulated to act for the Crimson Order, however, on the day he wanted to quit the Crimson Order, the society committed the murder of his wife, Donna. Afraid that Cathy would be killed just like her grandmother was, King would do anything to protect her. Furthermore, he knew that once the player arrested him for killing Adam, the Crimson Order would kill Cathy before killing him if he talked about them. This explained why King committed suicide without telling the team his motive: to protect Cathy.

Their investigation culminated in Aloki Indian Delsin Peota being scalped to death, with the words "You are next" carved in his chest, indicating that the player was next in line. Throughout the investigation, they infiltrated the Crimson Order's illicit gold mine, where they found Adam's execution order issued by Serena Johnson commanding King to kill Adam for discovering their gold mine. After arresting Serena for her involvement in the Crimson Order, they found out that Cathy had broken into the gold mine, not to mention they also found her hair traces on Delsin's scalp. To Alex's horror, the team arrested her for her possible involvement in the society.

In the end, prison warden Milton Grimmes was exposed as Delsin's killer and by extension, the leader of the Crimson Order. Milton detailed how his ancestor, Solomon Grimmes, married Aloki Indian Inaya to organize a feast to gather all the Aloki Indians under one roof and kill them all in order to gain control over the gold mine. After Ramirez hit Milton, who was attempting to murder the player, the team handcuffed him, failing him to bring the player's head during their ceremony that night. The team would infiltrate the ceremony, arresting Alden Greene and Howard Johnson for their involvement in the Crimson Order, not to mention the society had ordered Alden to kill Rachel Priest. Cathy was eventually released from prison due to her innocence.

A few days after the arrest, Jones and the player proved that the gold mine was originally owned by the Aloki Indian, finally vindicating the tribe. With peace restored in the city, the player accepted a position in the Pacific Bay Police Department, but not before the team (including Cathy) held a farewell party for the player.

The homecoming of the player

Five years following the player's departure, they returned to Grimsborough, where a satellite had crashed into the city a year before. The player would reunite with Jones and a married couple of Cathy and Alex (who was then a stay-at-home father) before ending up solving the murder of their old colleague, Nathan (who was then a veterinarian). During this investigation, the player met all the members of the police, including Ramirez, who was recently returned to Grimsborough. Later, Jones hosted a house party for welcoming the player back.

During the aftermath of an earthquake that struck the city, the team looked for the disappearance of Zoe Kusama, a social worker and Jones' girlfriend. After solving the murder of a suspicious artist, the team found an amnesiac Zoe, who somehow recognized the now-released Tony Marconi. To learn about his connections to her disappearance, the team went to the Greens, where he was running a company, Hawk Eye Security, that had been hired to guard the satellite crash site by DreamLife, the tech company that owned the satellite. After stopping DreamLife's virtual reality game that Rupert became addicted to (even involving himself into the murder investigation of the VR hostess), they learned that a religious cult called The Higher Truth was making anonymous donations to DreamLife.

The team would bring down the aforementioned cult, with Gabriel's infiltration into the cult (even getting himself into the murder investigation of the cult leader), in Old Town, where the long-lost city of Xerda was excavated. After learning that DreamLife's dome was hiding a meteorite instead, the team was transferred to the Maple Heights to trap the resurfacing deadly fish that had infested the district's floodwater and to investigate who had made the fish resurface. Throughout these investigations, the team had prepared for their infiltration into the dome, with Rupert impersonating geologist Mortimer Pickering, whom DreamLife employed to work under the dome.

Fighting against the neohuman army

The patrol car as seen in the mobile version.

Jones pops up as the player receives his/her final score of a crime scene. 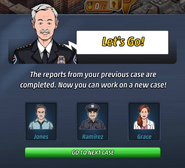 Jones, Ramirez, and Grace fill in reports for the player. 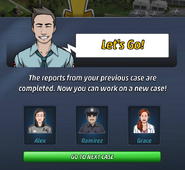 Alex, Ramirez, and Grace fill in reports for the player.
Add a photo to this gallery

The patrol car as seen in the mobile version.

Jones, Gloria, and Cathy in a "Coming Soon" in-game pop-up. 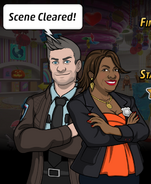 Jones and Gloria pop up as the player receives his/her final score of a crime scene. 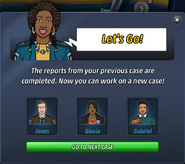 Jones, Gloria, and Gabriel fill in reports for the player.
Add a photo to this gallery 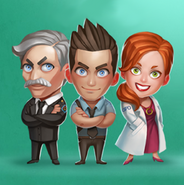 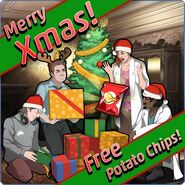 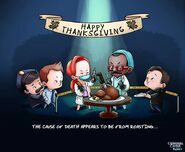 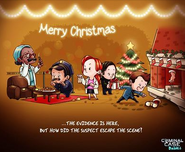 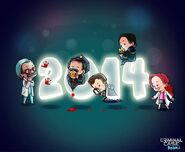 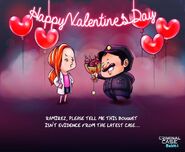 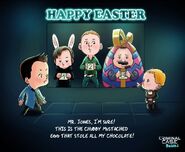 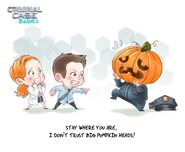 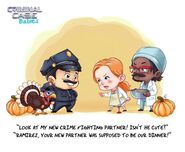 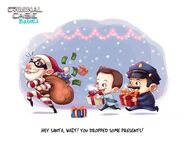 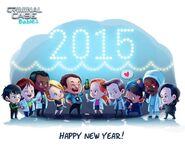 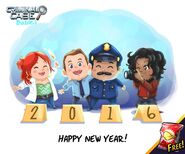 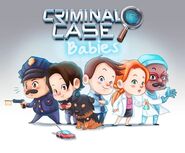 Reveal artwork for The Conspiracy.
Add a photo to this gallery

Retrieved from "https://criminalcasegame.fandom.com/wiki/Grimsborough_Police_Department?oldid=516257"
Community content is available under CC-BY-SA unless otherwise noted.