Gretl Beutelspracher was a suspect in the murder investigation of movie star Hans Vogel in Auf Wieder-Slain (Case #3 of World Edition).

Gretl is a 22-year-old beer girl. She wears a white dress with red straps and has long blonde hair tied into braids. It is known that Gretl listens to German music.

Gretl was first spoken to by the player and Carmen after they found a broken heart cookie with her and the victim's names on it. She was sobbing heavily hearing that the victim was killed, and told them that she and the victim were dating. Carmen remembered that she was never mentioned in any interviews, but Gretl said their love was private, saying that years of intimate history should not be exposed to the public.

Gretl was spoken to again after the team found a restraining order the victim issued. According to Marina, it was filed against Gretl; and Marina explained it was erotomania, a psychotic delusion where someone believes someone, often a celebrity, is in love with them. Gretl was oblivious saying that their relationship was real and that they were in love. When the restraining order was brought up, she explained that Hans just did not understand their love. When she went to Los Angeles to explain it to him, he did not allow her in. When Carmen suggested it was because of that she killed him, Gretl said she would never do that to her love.

Gretl was found to be innocent after the team incarcerated Johan Schnee for Hans' murder. 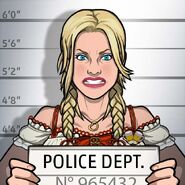 Retrieved from "https://criminalcasegame.fandom.com/wiki/Gretl_Beutelspracher?oldid=408349"
Community content is available under CC-BY-SA unless otherwise noted.