Greta Meduse was the killer of her daughter, CEO Teresa Turing, in Immortal Sin (Case #49 of Pacific Bay). Later, Greta escaped from prison and became a suspect in the murder investigation of detective Frank Knight in The Final Countdown (Case #59 of Pacific Bay).

Greta is a 60-year-old woman who happened to be the mother of the victim. She has short blonde hair, blue eyes and mild wrinkles.

In her first appearance, she wears a white dress with a green and black scarf, and has a jellyfish sting on her neck. It is known that Greta uses hand weights, eats sushi, and uses rejuvenating cream.

In her second appearance, she wears a white raincoat and it is discovered that she eats canned meat and takes energy pills.

Greta was first spoken to by Amy and the player after finding a bottle of champagne she sent to Teresa. She was shocked to hear of her daughter's death, but wondered what she was doing at a lab. Greta always told Teresa to rely more on her looks than her brains, and was happy she managed to become the CEO of Meteor Systems. She believed it was up to her to be the family beauty now that Teresa was dead.

Amy and the player had another talk with Greta after finding a message she sent to the victim on a pamphlet for Botox. She said ever since she had Teresa, she became a sagging, droopy mess. Despite doing whatever she could to stay young, she continued to blame her daughter for her looks. Greta never wanted a child in the first place because of all the stress that came with it, as well as seeing them grow more beautiful while she got older. Amy questioned if that meant the victim owed Greta her life, but she replied saying Teresa only owed the expenses to make her young and beautiful again.

Greta was later revealed to have been her daughter's killer. Amy was stunned when the player found out that Greta killed her own daughter, in which Greta was unhappy about what the player came up with. In spite of Greta's false arrest accusations, Amy had enough evidence to bust Greta thanks to the player. Greta felt that Teresa was obligated to share the youth with her, in which Teresa kept her immortality experiments to herself, something Greta hated since she did not tolerate her daughter to keep secrets. Amy informed Greta about Teresa's terminal disease (in which Yann found out during the investigation, which motivated Teresa to start her dangerous immortality experiment), something Greta never knew, and felt that the terminal disease was something Teresa should not have hid at all. The player had enough of Greta, so they shipped Greta to face Judge Dante.

Judge Dante deduced the murder method monstrous but Greta defended herself by telling the Judge that Teresa hid her terminal disease from her. Judge Dante felt Greta took punishment to unacceptable levels, and in spite of what Greta said, Judge Dante made it clear that he was the one holding the judge's gavel, allowing him to sentence Greta 20 years in jail.

Albert Tesla had a dirty game for Amy and the player to play: Find which one of the five previously convicted killers who killed Frank in a limited time, or allow him to destroy Pacific Bay, Greta being one of them.

After the team found her face on a muddy towel, they immediately left to find and speak with her. Greta had apparently came to The Wastes because she heard of some anti-aging mud that was there. So when her cell door was open she did not hesitate to go to The Wastes, but Amy was shocked at her drive for eternal youth and locked her up in bunker until she could be returned to prison.

Greta was spoken to once again after the team found a photo of her with a message to Tesla saying to 'make her 19 again'. She admitted that she actually came to The Wastes because of Tesla's virtual reality, which she believed could make her young again. Amy wondered if Greta killed Frank in order for her to gain access to the virtual world, but Greta replied saying she did not touch a hair on Frank's head.

Greta was found to be innocent after it was revealed that Bobby Prince killed Frank. However, she was spoken to again concerning Amy and the player's radiation issue. She told the officers that Tesla gave her some red and blue pills that would keep her radiation levels low. She said that she left the pills back at the computer lab, so Amy and the player left for the lab to find them. 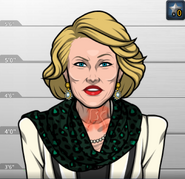 Greta, as she appeared in Immortal Sin (Case #49 of Pacific Bay). 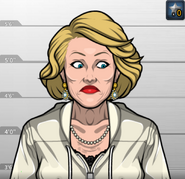 Greta, as she appeared in The Final Countdown (Case #59 of Pacific Bay). 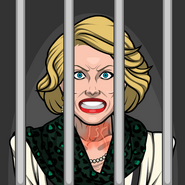 Greta, sentenced to 20 years in jail for the murder of her daughter, Teresa Turing. 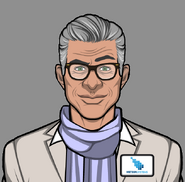 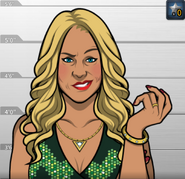 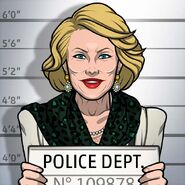 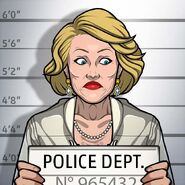 Retrieved from "https://criminalcasegame.fandom.com/wiki/Greta_Meduse?oldid=501553"
Community content is available under CC-BY-SA unless otherwise noted.