Greta is a 35-year-old inventor. She wears a black hat with goggles and has wavy brown hair. She dons a white, long-sleeved, ruffled blouse with a brown arm strap. Additionally, she wears a gold amulet, earrings, a World Exhibition pin and is seen holding a pencil.

In her first suspect appearance, it is known that Greta knows how to shoot, eats hot dogs and reads Jules Verne.

In her second suspect appearance, she dons a white blouse with a pink collar and pink details, accompanied with a white bowler hat with a black stripe and bow. She also wears a red rose pinned to her chest. It is discovered that she rides hot air balloons.

After Katherine Woolf reported that a film reel had gone missing, Charlie and the player went looking for it. Greta was shown as one of the inventors to show off their inventions in the film reel featuring them. Charlie said that Greta invented a device that could take colored photographs.

Greta became a suspect after the player and Maddie found her medal in the victim's workshop. She did confirm she knew Orville, but was surprised to see his steampack was one of the high contenders for this year's prize. When asked why, Greta said the victim was a messy inventor, and was unworthy of even entering the competition to begin with.

Greta was spoken to again regarding an article detailing an invention built by her and the victim being banned in the country. She explained that they worked together, making a unique firearm that could revolutionize the military. However, Orville sold it before it could be tested, resulting in a catastrophe. When suggested that she could have killed him because of the past, Greta said she would not have needed to, his inventions would kill him long before she ever could.

Greta was found to be innocent after the team incarcerated Abe Mullins for Orville's murder. But she was consulted on finishing Orville's steampack by the player and Charlie after the first flight failed. She explained to them that she was not surprised as she expected the victim to be cheap with materials. But if he wanted to ensure flight, he would have gone to great lengths to ensure its performance. She thought a piece could be missing, given the crash and Orville's way of ensuring no one would steal his ideas. They searched the crash site again, and managed to find the missing piece. However, one of the tubes which would attach it to the steampack was disconnected, meaning the steampack would malfunction even if the part was put back in place. At the time Charlie suspected it was sabotaged, but Greta wrote that off as Orville being an incompetent inventor.

After the investigation, Greta called for the player to assist her. She had her invention, a camera that takes photos in color, sabotaged. She feared that she'll never be able to have her invention mass produced as she thought she would never win. However, she had lost the camera during the aftermath of the ape escaping. Isaac assured her that the player would find proof if her accusations were true. She had last seen her invention in a box when she lost it. This prompted them to search the streets for it.

Greta once again became a suspect after an old photograph of her and Celine was found. She had witnessed Celine falling from the tower, but assumed that it was an accident. After being informed that it wasn't, she said that she wasn't able to see the killer as they were too high up. Greta and Celine had been best friends for many years, despite being rivals. Greta felt that it was encouraging to have another woman like Celine in a scientific world that was dominated by men.

Afterwards, an automaton made by Celine was found, which (per Charlie) was programmed to mimic human handwriting. The message that it was made to write was "You should give up now, Greta. You're a disgrace!", prompting the player to speak to Greta once again. She said that ever since she won the previous exhibition contest, her friendship with Celine had eroded. Celine had thought that she didn't deserve the victory. It only got worse when she entered the contest again, as Celine said that she was robbing her of her chance to shine and called her greedy for fame. Celine had handed her the note in an effort to dissuade her from participating in the contest, as if it would sway her.

Greta was found to be innocent after the team incarcerated Eleanor Halsted for Celine's murder and sabotaging the inventions.

Greta, as she appeared in Checkmate (Case #14 of Mysteries of the Past). 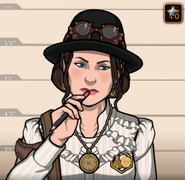 Greta, as she appeared in Out of Steam (Case #15 of Mysteries of the Past). 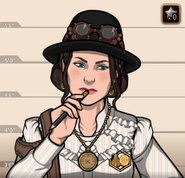 Greta, as she appeared in Monkey Business (Case #16 of Mysteries of the Past). 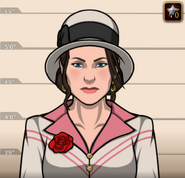 Greta, as she appeared in The Higher You Rise (Case #18 of Mysteries of the Past). 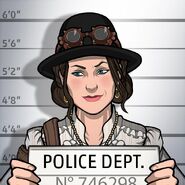 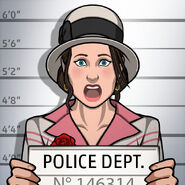 Retrieved from "https://criminalcasegame.fandom.com/wiki/Greta_Gundwood?oldid=415357"
Community content is available under CC-BY-SA unless otherwise noted.