Gregory is the 68-year-old now-former director of Gryphon Sanctuary. He has gray hair and a mole on his nose. He dons a light brown plaid coat with a name tag over a dark brown waistcoat and a white shirt.

In his first appearance, he has a rash on his right cheek and it is known that Gregory gardens, eats mushrooms and plays chess.

In his second appearance, his rash has healed and it is discovered that he has pharmaceutical knowledge, has fleas and drinks Corpse Revivers.

In his third appearance, it is revealed that he eats porridge, is right-handed and uses carbolic soap.

Gregory first met the player in front of Gryphon Sanctuary, where he alerted Maddie and the player to the murder. Gregory became a suspect after Maddie and the player found his negative review of the victim. He explained that they had misunderstood, and that he needed to give constructive criticism to the victim, who was one of his better employees. He said that he and the victim agreed that the asylum's policies were too lax, saying he would permanently restrain the patients and have them fed through ha tube if he had his way. Maddie and the player then left, making their disagreement with his ideas obvious.

Gregory was found to be innocent after the team incarcerated Dwayne Reed for Irving's murder. But he was later confronted by Judge Lawson and the player about wrongdoings in the asylum. Upon being threatened with being taken to court, Gregory assured them that the victim was the only doctor who had such radical methods. He then allowed them remove Alice Riddel from the asylum.

Gregory became a suspect again after Maddie and the player found a painting he made for the victim at the crime scene. He was surprised to hear of his old friend's murder, saying he and the victim were friends ever since they were young. They had both been living in the hotel too, but he was unaware of who could have killed him since he claimed Oliver would never hurt a fly.

Gregory was spoken to again about the playing card he sent to the victim, with numbers corresponding to his back account. He said he and the victim liked to play for money occasionally, but Oliver was on a losing streak for some time and refused to pay. Gregory had been patient for some time, but the victim still refused and he did not like being taken for a fool.

Gregory was found innocent again after the team incarcerated Johnny Torrents for Oliver's murder. But he was later spoken to again about allegations that people are unlawfully being put into the asylum for trivial reasons. When presented with them, he shrugged them off saying they were legitimate signs of unrest. Even when they already had evidence of wrongful commission, Gregory still refused to acknowledge them. With some help from Fleur Stone, the player and Isaac found proof someone was taking bribes to put mentally sound people in the asylum. Gregory could not believe someone was actually accepting bribes, and claimed to have absolutely no knowledge about it. With that said, he was going to take the evidence and look into the matter personally, but against Gregory's wishes Isaac said he and the rest of the team would take a closer look into his establishment and its practices themselves.

Gregory became a suspect for a third time after Isaac and the player found the body of Patricia Rochester in the basement of Gryphon Sanctuary. Displeased that they were there, Gregory said that it was funny that she had been murdered as soon as the player arrived, and that everything had been going fine. He then said to prove that he couldn't have done a thing to prevent her death, he said he would launch another investigation to prove that Patricia's death was nobody's fault.

Gregory was spoken to again about Patricia's admittance into Gryphon Sanctuary after a discussion with Horatio Rochester. When told that Patricia was of sound mind when she was admitted into the asylum, he swore that he had no idea. When asked if no one examined the patients when they arrived, he turned the tables on the player and asked them how many criminals had sworn that they were innocent. He argued that he would be unwise to believe his patients, and that Patricia was a textbook lunatic.

Gregory was found to be innocent a third time after the team incarcerated Sylvia May for Patricia's murder. But he was later confronted by Judge Lawson and the player about his incompetence and was subsequently fired. Shocked, he asked them who would run the asylum, and that the patients would seize control unless they were ruled with an iron fist. 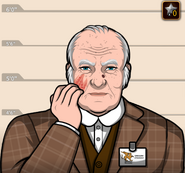 Gregory, as he appeared in Doctor, Interrupted (Case #45 of Mysteries of the Past). 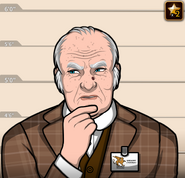 Gregory, as he appeared in Doom Service (Case #47 of Mysteries of the Past). 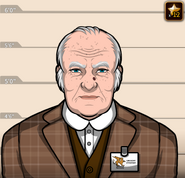 Gregory, as he appeared in Unsafe Haven (Case #48 of Mysteries of the Past). 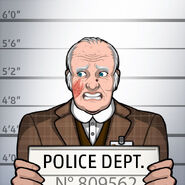 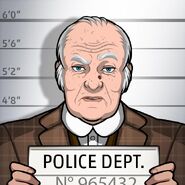 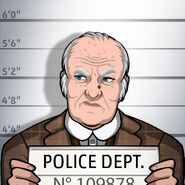 Retrieved from "https://criminalcasegame.fandom.com/wiki/Gregory_Stravinsky?oldid=535839"
Community content is available under CC-BY-SA unless otherwise noted.