In his first appearance, Greg wears a white diamond-patterned, open-collared shirt with the sleeves rolled up and a fake police badge safety pinned to his left lapel. It is known that Greg eats gruel, is claustrophobic and plays Link 4.

In his second appearance, Greg's body and face are covered in soot stains. His shirt is torn and unbuttoned, revealing a pale yellow t-shirt underneath. He also ditches his fake police badge. It is discovered that he eats chicken fried steak, is scared of the dark and listens to Billie Kelson.

After arresting Marigold Carson's killer, Gwen, Felix and the player summoned a serial-killing ghost in a séance. The spirit mentioned Greg's name and how he had tried to stop them before. Later, Hope determined that Greg was a detective who was the investigating officer from the previous tarot card murders. She then revealed that Greg was now a patient at the Blackmoor Asylum in El Paso, Texas.

Greg became a suspect after Gwen and the player discovered that the victim had assessed him. Greg accused the team of being criminals and demanded to speak with Dr Stein. Gwen informed him that she had been murdered and tried to find Greg a doctor. However, he left, claiming that he needed to file a police report.

Mid-investigation, Greg tried to escape from the asylum. Gwen and the player managed to stop him and allowed assistant Adam Enstrom to escort him back to the asylum.

Greg was spoken to again about him trying to kill the victim with a scalpel. He revealed that Dr Stein had taken away his Link 4 game, so he tried to arrest her for grand theft. However, he claimed that he had not murdered her as he was an upstanding citizen of the law.

Greg was found to be innocent after the team incarcerated Adam Enstrom for Dr Stein's murder. Later, Gwen and the player questioned Greg about the tarot card murders. He revealed that the murders had started five years ago and that he had written his findings online. He told the team that he had written the password down and thrown it in the laundry, prompting the team to search the bathroom for the password.

After Hope unlocked Greg's files, the team deduced that the serial-killing ghost was Abigail Riley. They informed Greg about their suspicions, prompting Greg to reveal that he had seen Abigail's ghost when he arrested one of the tarot killers. However, no one had believed him. Greg then told the team that he had suspected that Abigail's death had been an occult ritual gone wrong.

Mid-investigation, Hope informed Luke and the player that Greg had escaped from the asylum.

Greg became a suspect again after Luke and the player found his map and tracked him down. After recognizing the team, he informed them that he had escaped from his "captors" and was going to solve the tarot card murders. After Luke failed to take the gun that Greg had stolen from the security guard, the team took Greg in.

Greg was spoken to again about him lying about having the gun after Luke and the player found it. Greg explained that he was a law enforcement official and that he needed to have a gun. He then admitted to trying to elicit a confession from the victim in order to prove his ghost theory. However, Fielding refused and said that he would die before confessing.

Greg was found to be innocent again after the team incarcerated Axel Bross for Fielding's murder. 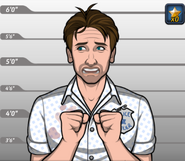 Greg, as he appeared in Mad World (Case #9 of Supernatural Investigations). 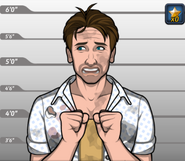 Greg, as he appeared in The Ghost of Murders Past (Case #10 of Supernatural Investigations). 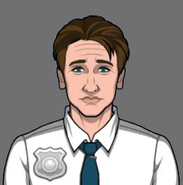 Greg, as a police officer prior to his internment to the Blackmoor Asylum.
Add a photo to this gallery

Retrieved from "https://criminalcasegame.fandom.com/wiki/Greg_Schmidt?oldid=517919"
Community content is available under CC-BY-SA unless otherwise noted.