Congressman Graham Winslow was the killer of Soviet Ambassador Lev Romanov in Crime and Punishment (Case #10 of Travel in Time).

Winslow is a 57-year-old American Congressman with graying brown hair, green eyes and a mole on the left side of his forehead. He is seen wearing a white shirt with a blue polka dotted tie underneath a blue suit with a lapel pin showing the American flag. It is known that Winslow read Crime and Punishment, knows Morse Code and uses Breath Spray and drugs.

Winslow became a suspect after Jack and the player found a newspaper photo of him and the victim shaking hands. After Jack told him that Lev was dead, Winslow informed the team that he had met with Lev during diplomatic meetings between the US and the Soviet Union. Lev had wanted Winslow's advice on upcoming trade negotiations, and he had obliged.

Winslow was spoken to again about Lev's blackmail letter to him, threatening to expose his illicit drug use. He revealed that Lev demanded that he lifted US trade sanctions against the Soviet Union, or he would go to the press with his information. However, Winslow did not have the authority to give Lev what he wanted, putting him in a difficult position.

In the end, it was proven that Winslow was Lev's killer. Winslow admitted to killing the ambassador in order to kickstart an armed conflict between the Soviet Union and USA so that the USA could wipe out the Soviet Union immediately. The team then took him to the judge to answer for his crimes. 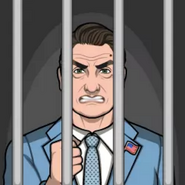 Winslow, arrested for the murder of Lev Romanov.
Add a photo to this gallery

Retrieved from "https://criminalcasegame.fandom.com/wiki/Graham_Winslow?oldid=500952"
Community content is available under CC-BY-SA unless otherwise noted.