Grace Goude was a suspect in the murder investigation of editor-in-chief Annette Sommeur in Off with Their Heads (Case #2 of World Edition).

Grace is a 40-year-old photographer. She wears a black suit jacket over a white shirt and a black French beret and is seen holding a black camera. It is known that Grace eats camembert, smokes and reads French philosophy.

Grace was first interrogated after her business card was found on the primary crime scene. She was glad to know that The Bureau was investigating Annette's murder as the victim only wanted the best, which was why she hired Grace. However, Grace stepped out for a minute for some fresh air, and returned only to find Annette was killed. She explained that two hours beforehand, she was picking up the victim at the Amelie B. boutique, so the player and Carmen went there for investigating.

Grace was spoken to again after the team found a message from her to the victim on an empty coffee cup. She explained that the victim treated her like she was her lackey. When Grace said she wanted to leave Pretty Fair, the magazine Annette worked on, the victim threatened to blacklist her from the publishing world. Grace had been stressing out since, but was firm when she said she believed that she should be free.

Grace was discovered to be innocent after the team arrested Constantin Perrier, but she was spoken to again regarding her presence at the castle of Versailles. Grace explained that she was at the crime scene because someone offered her $100,000 for a photo session. She was not sure who it was because they slipped her a note and did not leave their name, plus the victim was telling her to hurry up with her coffee. She believed that she left the note back at the boutique so the team left to investigate that place again. 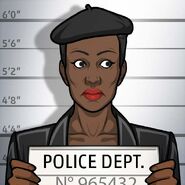 Retrieved from "https://criminalcasegame.fandom.com/wiki/Grace_Goude?oldid=408347"
Community content is available under CC-BY-SA unless otherwise noted.