Goodwill Ngele was a suspect in the murder investigation of journalist Jude Connelly in Diamond in the Rough (Case #40 of World Edition).

Goodwill is a 12-year-old Motswana child who is forced to work in the diamond mines. He has short black hair, wears a yellow shirt with diamond dust on his shoulders, is covered in dirt stains and usually carries a pickaxe.

Goodwill was first spoken to after Carmen and the player saved him from falling off a cliff near the Victoria Falls. He said he did it to raise awareness about child labor, like the victim told him to. The victim was apparently writing a story about Goodwill's life in the mines to expose the truth about child labor. When informed of Jude's murder, Goodwill got scared since no one would know what is truly happening and kids would have to keep working in the mines. He felt it was because of his story that Jude died, and Goodwill decided to think of more stunts to raise awareness.

Goodwill was later proven to be innocent after Olivier Feraud was incarcerated for Jude's murder. He later went to the police station to report to Michelle Zuria and the player that he saw a person in a raincoat throwing some files into the falls. He said he could not see their face. 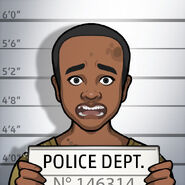 Retrieved from "https://criminalcasegame.fandom.com/wiki/Goodwill_Ngele?oldid=418422"
Community content is available under CC-BY-SA unless otherwise noted.