Going Once, Going Twice, Dead! is a case featured in Criminal Case as the twenty-fifth case of Travel in Time (Season 6) and the three-hundred sixteenth case overall. It is the final case to take place in Age of Sail.

As soon as the team landed in Tortuga, Jack and the player headed to the Severine Estate auction room, only to find auctioneer Henri Pelletier with his head blown off.

Mid-investigation, Amy happened upon Pelletier's head in the veranda. Later, a gunpowder fire started in the mansion before Kai put it out. The team then found enough evidence to arrest estate owner Simone Severine for the murder.

Simone said that she and her family used to be slaves in Pelletier's plantation. When Pelletier sold off her parents to another plantation, she and her sister tried to escape. Unfortunately, her sister was caught and so Simone watched as he personally whipped her sister to death. Years later when Pelletier showed up at the estate for the auction, Simone used the knowledge on explosives that she gained from her late husband by giving her former master an explosive-laced cigar that blew up as soon as he lit it. The team handed Simone over to the Tortugan authorities.

Post-arrest, Uriah Haddonfield told Jack and the player that he spotted an Egyptian toying with the auction candle, explaining that the candle snuffing out would mark the end of the auction. The team found the candle in the auction room, which (per Kai) came from the future and whose snuffing out was remote-controlled. Now alert of Ammon Bast's presence in the estate, the team replaced the candle with a normal one before telling Uriah that the auction would go smoothly.

Meanwhile, Zara and the player assisted Isadora Haddonfield and Quentin Montague (who was able to escape from the deserted island along with all the other island inhabitants thanks to the flare gun the team left for them) in releasing Mary Read, who was illegally arrested by Tortugan authorities for piracy. After all the events, the auction finally started, with Quentin replacing Pelletier as the auctioneer. With the Egyptian Trading Company failing to secure the trade routes, Ammon shot Orlando in the chest and then escaped by jumping off the veranda. On the veranda, they found proof that Ammon loaded 18th-century guns onto his time machine. Fortunately, Kai ensured the team that he slipped his newly-devised tracker onto Ammon so they could figure out his destination.

After some time, Orlando was able to recover from his injuries. Kai then said that Ammon had travelled to 1235 Mongolia. Certain about the place but uncertain about the exact date, the team travelled in time to prevent Ammon from introducing future technology to Medieval Mongolia.

Uriah Haddonfield
Add a photo to this gallery

Quentin Montague
Add a photo to this gallery 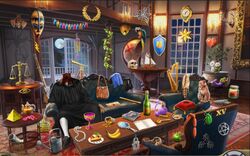 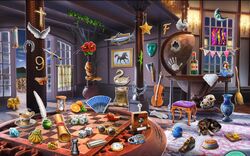 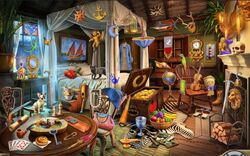 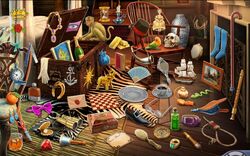 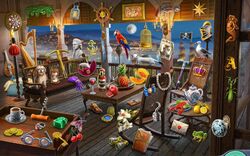 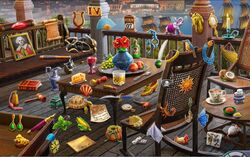 Veranda Sitting Area
Add a photo to this gallery

Retrieved from "https://criminalcasegame.fandom.com/wiki/Going_Once,_Going_Twice,_Dead!?oldid=532739"
Community content is available under CC-BY-SA unless otherwise noted.