Gloria Roach was a suspect in the murder investigation of junkie Dan Broke in The Dockyard Killer (Case #4 of Grimsborough).

Gloria is a 45-year-old brown-haired building superintendent who is most commonly seen wearing a pink bathrobe with a duck on it and pink curlers in her hair. She wears gold earrings and full face makeup. It is known that Gloria is right-handed.

Gloria never had a big role in the case, serving only as a link between the police, Sally Stone, and Dan Broke. She informed them about where the pair lived and was not seen afterwards. 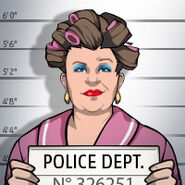 Retrieved from "https://criminalcasegame.fandom.com/wiki/Gloria_Roach?oldid=530015"
Community content is available under CC-BY-SA unless otherwise noted.