Glen Coleman was a suspect in the murder investigation of landlord Joshua Gibson in Dead Men Tell No Tales (Case #28 of The Conspiracy).

Glen is a 43-year-old luxury car salesman. He has short, messy blond hair, brown eyes, a short beard and a mustache. He wears an open-collared white shirt under a black suit jacket with a red patterned tie and a packet of cigarettes in his left breast pocket. He is also seen holding a cigarette and a blue lighter in his right hand and has eye bags. It is known that Glen collects antique guns, eats lobster bisque and smokes.

Glen became a suspect after Jones and the player found his car key in the crime scene. The team then asked Glen about the victim. After knowing Joshua was murdered, Glen was shocked. He said Joshua was a generous landlord who owned all the properties on Doreo Drive. He also revealed that he used to see him strolling the makeshift boardwalks over Doreo Drive to check on his property, prompting Jones and the player to go there to investigate.

Glen was spoken to again about his message to the victim on his car's hood badge. When being asked about this, Glen said that Joshua ruined his business because he did not include the flood and water damages clause in Glen's insurance policy. But he said he did not kill the victim because his ruined business was bad enough for him.

Glen was found innocent after the team incarcerated Carl Rossa for Joshua's murder. 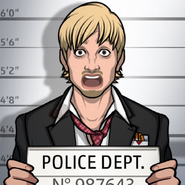 Retrieved from "https://criminalcasegame.fandom.com/wiki/Glen_Coleman?oldid=474560"
Community content is available under CC-BY-SA unless otherwise noted.