Ginny Farnsworth was a suspect in the murder investigation of editor-in-chief Barbara Coldwell in A Study in Pink (Case #52 of Mysteries of the Past).

Ginny is a 47-year old fan of Pistols & Petticoats. She has long wavy fawn hair and wears a black hat with a blue rose. She dons a blue plaid coat over a white buttoned shirt. Additionally, she wears round black glasses and blue earrings. It is known that she eats sprinkle donuts, has read Components of Composition and uses smelling salts.

Ginny became a suspect after Isaac and the player found her card to the victim at the crime scene. Upon learning about the murder, she fainted, but later revived herself with her smelling salts. She told them that she had followed the romantic advice column in Pistols & Petticoats religiously, and that if all the world listened to the victim's romantic advice, no one would be alone.

Ginny was spoken to again about her burnt wedding cake topper in the victim's handbag. She explained that she had sent the burnt cake topper to the victim in order to show her what she thought of her romantic advice. She revealed that she had written to her to complain about her husband. She had told her to leave him. After filing for divorce, the value of her husband's business went through the roof, meaning that she had lost out on millions. After drafting a strongly-worded letter to the victim, she instead decided to send her the burnt cake topper to send a clear message.

Ginny was found to be innocent after the team incarcerated Verushka Coldwell for Barbara's murder. 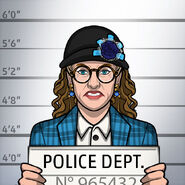 Retrieved from "https://criminalcasegame.fandom.com/wiki/Ginny_Farnsworth?oldid=415449"
Community content is available under CC-BY-SA unless otherwise noted.