Ginger was a suspect in the murder investigations of GBPD detective Ed Dunkin in Good Cop Dead Cop (Case #6 of Grimsborough) and Vipers leader Salvador Cordero in Into the Vipers' Nest (Case #11 of Grimsborough).

Ginger is a 27-year-old prostitute with long blonde hair and blue eyes.

In her first appearance, she wears red lipstick and has a beauty spot under her lips. She also wears a red dress.

In her second appearance, she sports an oil stain on the left side of her dress. It is discovered that Ginger is asthmatic, chews gum and uses hand sanitizer.

Moments after Ed was found shot to death, Ginger stated that she had witnessed the killer fleeing the murder scene and heading straight to the river. She could only notice that the killer was male and that his eyes were blue in color. Ginger was eventually found innocent when Harry Landry was convicted of the murder.

In the Additional Investigation of the case, Ginger requested help from Jones and the player after her handbag was stolen and thrown away at the river. The team did not hesitate to help her out, so they dived into the river and, after a thorough investigation, successfully found the handbag. However, Jones wanted to take a look at its content "to make sure it was Ginger's". They found a card of the Blue Flamingo, which was suspected criminal Tony Marconi's nightclub. Ginger somehow managed to deduce the fact that her handbag was checked by Jones, and as a result told him that she was an adult and could take care of herself. This explained a bit the situation in her next appearance.

Soon after The Vipers's leader, Salvador Cordero, was found lifeless, Ginger was flagged as a suspect once again since the team found a screwdriver in Salvador's garage. She stated that Salvador wanted to have sex with her, but he shouted at her and also hit her. This infuriated Ginger, who then refused to work for him.

At the climax of the investigation, Tony Marconi was incarcerated for murdering Salvador after he saw the victim misbehaving with Ginger.

Prior to his arrest, Tony appointed Ginger as the new manager of his club, Blue Flamingo. However, during the Additional Investigation of the case, Curtis Newman did not believe her and would not let her take the club over. So to solve the matter, the team had to investigate the Blue Flamingo for relevant clues. The search led them to find Curtis's briefcase, which contained the official document. It was then shipped to the laboratory for analysis. After careful observance, Alex could confirm that the document was legit. 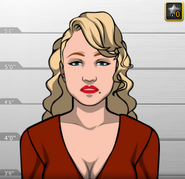 Ginger, as she appeared in Good Cop Dead Cop (Case #6 of Grimsborough). 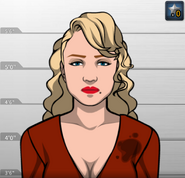 Ginger, as she appeared in Into the Vipers' Nest (Case #11 of Grimsborough). 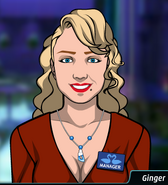 Ginger, as she appeared during the aforementioned case's Additional Investigation, wearing a necklace and a Blue Flamingo manager badge. 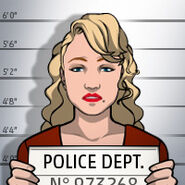 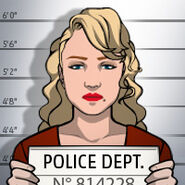 Retrieved from "https://criminalcasegame.fandom.com/wiki/Ginger?oldid=531307"
Community content is available under CC-BY-SA unless otherwise noted.