Gina Rowbottom was a suspect in the murder investigation of scientist Dr Henry Liu in Extinguished (Case #58 of The Conspiracy).

Gina is the 85-year-old neighbor of the victim. She has short, graying-blond, wavy hair and a beauty spot on her left cheek. She wears a cream jacket and a leopard-print scarf. Additionally, she sports red lipstick and earrings. It is known that Gina uses antiperspirant.

Gina became a suspect after Gloria ad the player found her voicemail to the victim, thanking him for dinner. Initially thinking that she was being cautioned over a driving offence, Gina was informed of the murder. She explained that the Lius were delightful neighbors and were the closest thing she had to children.

Gina was spoken to again about her threat to the victim. She told the team that after she invited herself to dinner for the third time that week, he snapped and told her to drop dead, branding her a burden. She then told the team that she had the last laugh because Henry was dead and she was still alive and kicking.

Gina was found to be innocent after the team incarcerated April Liu for Henry's murder. 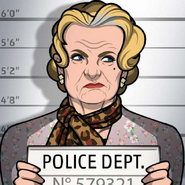 Retrieved from "https://criminalcasegame.fandom.com/wiki/Gina_Rowbottom?oldid=476230"
Community content is available under CC-BY-SA unless otherwise noted.