Lady Georgina Upperton was the victim in Let Her Eat Cake (Case #10 of Mysteries of the Past).

Georgina was a countess of her family, and a part of Concordian nobility. She had blue eyes and black hair. At the time of her death, she sported red lipstick and donned a yellow dress with a fur scarf, a white and yellow pearl necklace, a pair of green earrings and a large hat decorated with a white ribbon.

Georgina was found at the picnic lawn of Prospect Gardens with greenish skin and blood coming from her mouth. According to Dick, her cause of death was poisoning by cyanide, ingested with something she ate. He also managed to find traces of tuber melanosporum in her hair, which was also known as the black truffle. Though he was not sure why there were traces of truffles in her hair, this meant Georgina's killer ate truffles.

Georgina was an attendant at Mr Alastor's fourth party at Lady Highmore's Prospect Gardens. At the party, she encountered her old flame, author Ernest Swanswaddle. She also butted heads with party planner Elisa Melody as she mocked Elisa's party etiquette. Elsewhere, she encountered Lord Samuel Waldorf-Ridgewood, who stole her pocket mirror and observed her at the party to establish her psychological profile.

Prior to the party, Georgina wrote to the Concordian Gazette to express her disapproval of the upcoming World Exhibition. This prompted Mayor Cornelius Castletown, an advocate for the event, to attempt to appease her as her status and connections proved to be a threat to his ambitions.

The killer turned out to be Ernest.

When he confessed to the murder, Ernest said that despite their brief romantic summer twenty years prior, Georgina turned him down and told him to come back when he was a prince. When Ernest became rich and famous due to his poetry, he approached her once again. She only laughed and implied he was not a proper suitor, claiming that she would rather kiss a frog. Seeking revenge, Ernest stole the cyanide crystals prescribed to Lady Highmore and poisoned a frog-shaped cake (symbolizing how she claimed she would rather kiss a frog than Ernest) she would later eat. In court, Judge Takakura sentenced him to 15 years in prison. 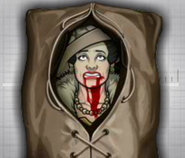 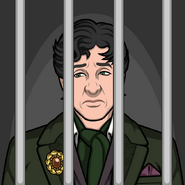 Archie Rochester, the late mastermind behind Georgina's murder.
Add a photo to this gallery

Retrieved from "https://criminalcasegame.fandom.com/wiki/Georgina_Upperton?oldid=494998"
Community content is available under CC-BY-SA unless otherwise noted.