Georgia is a 42-year-old street hustler. She has curly brown hair under a forest green cap. She wears a forest green coat over a maroon waistcoat with a pocket watch in the right pocket and a pale yellow blouse. Additionally, she is seen with an ace of clubs up her sleeve. It is known that Georgia reads the Wolf Street Journal.

Georgia became a suspect after the player and Maddie found one of her cards at the Wolf Park Fountain. After Maddie and Georgia reminisced about the time when Maddie was still a rookie officer, she informed her that Jade had been murdered. She said that Jade was often found by the fountain, and that she'd wave whenever she saw her. She said that she seemed nice enough, but she knew a trickster when she saw one, so she didn't pry.

Georgia was spoken to again about the victim's drop point diagram that sported a card shark symbol. Georgia admitted that she knew the victim was running a counterfeit racket, and that she wanted to be a part of it. However, Jade told her to stay away from it.

Georgia was later found to be innocent after the team incarcerated Gail Harper for Jade's murder. 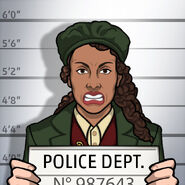 Retrieved from "https://criminalcasegame.fandom.com/wiki/Georgia_Ward?oldid=415407"
Community content is available under CC-BY-SA unless otherwise noted.