Georgi Papacoulis (Grk: Γεώργιος Παπακούλλης) was a suspect in the murder investigation of CEO Hank Buxton in The Scent of Death (Case #44 of Grimsborough).

Georgi is a 51-year-old man with black hair and brown eyes who wears a corn-colored shirt and green suspenders. Georgi is seen having a leaf on his right shoulder. Georgi has a long moustache. It is known that Georgi has manicured hands and wears pantyhose.

Georgi was called into the investigation by Jones and the player after a soggy paper was revealed with forensic powder doubling as a complaint filed by Hank Buxton. The team was puzzled when Georgi loved it when Hank was shouting at the top of his lungs but knew he was like a clown since he described Hank as being chubby and reddish. Jones countered Georgi's words by alerting him that Hank wanted to fire him from the Grimsborough Country Club, but it did not bother Georgi because he claimed to have many jobs in his life. Hank did not like the way Georgi performed, and it seemed every chance Hank got, he attempted to get Georgi fired from a job. Jones suspected that Georgi was excessively carefree, and needed to eyeball him to ensure he was not matching the killer's description.

Georgi was interrogated a second time when a Drag Show flyer was pieced together and told the team that it was a flyer for his show, in which the police insisted in talking to Peggy Buxton before the show.

As Peggy was indicted for slaying her own son, she told the court that she wanted Georgi to help her carry his body across the roof claiming that Hank was drunk, making Georgi an accomplice in the murder, though he was unaware of this. In spite of the claim, Georgi was innocent, but he wanted the team to find his show's dress and hand it to him before the team worked on a new case.

Georgi, dressed up as a woman. 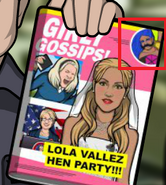 Georgi on a magazine. 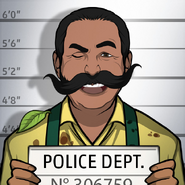 Retrieved from "https://criminalcasegame.fandom.com/wiki/Georgi_Papacoulis?oldid=520608"
Community content is available under CC-BY-SA unless otherwise noted.