George Pryce (initially appearing as Jorge Precio) was a suspect in the murder investigations of SOMBRA agent Zoila Huanca in Total Eclipse of the Heart (Case #46 of World Edition), Bureau agent Michelle Zuria in The King's Shadow (Case #48 of World Edition), and spy Jean Connerie in Operation Spyfall (Case #54 of World Edition).

George is a 70-year-old spy who used to work for MI6. He has short grey hair, a mustache and a beard.

In his first appearance, his hair is disheveled and he sports brown glasses. He wears a white and sandstone striped shirt with a badge of Saturn and a cochineal stain. It is known that George is right-handed, eats rocoto chilis, and speaks Quechua.

In his second appearance, he ditches the glasses and dons a blue flannel jacket over a white shirt with a red tie. It is discovered that he has read Rayuela de Ficciones, smokes cigars and drinks coffee.

In his third appearance, he draws his notepad and pen and replaces his tie with a scarf of the same color. It is revealed that he is a hacker.

Total Eclipse of the Heart

George (under the alias "Jorge Precio") became a suspect after the player and Jack found his map of Machu Picchu, with an 'X' over where the victim was killed. He said he put an X there because it was one of the best places in the southern hemisphere to view the solar eclipse from. Unfortunately, he was not able to due to the meeting and the murder occurring, and he offered his help in case they needed it.

George was interrogated again regarding his observatory badge in the victim's backpack. He said Zoila likely took it because she figured out he was not who he was pretending to be. He then revealed his true identity as George Pryce, an MI6 spy. When Jack asked if he was there investigating SOMBRA, he said he had no idea about them; their interests were more with Adolfo Herrera, who he planned to kidnap when he arrived to Machu Picchu. But since he heard that Adolfo was murdered, he felt that his job was done.

Despite the secret identity, George was found to be innocent after the team incarcerated Claudio Aguirre for Zoila's murder.

George became a suspect after the player and Carmen found his notebook in the file he had on Michelle. He said that MI6 knew of Michelle being ex-SOMBRA, and they suspected she was in danger. Carmen asked why he did not inform the Bureau that she was in danger, and pointed out it contradicted what he said before about not knowing who SOMBRA is. All he could say was that he did not work for them, and that saving her was above his pay grade.

George was interrogated again when Ingrid informed them that he was no longer a MI6 agent. He said they made him retire when he became "too invested" in SOMBRA, but he explained that he just proposed a more direct approach. It did not go as far as to tail Michelle, but he felt they needed to get closer to them, and understand how they operate. It was for that reason he followed Michelle, he also kept other agents under surveillance such as Ignacio Muñoz.

Despite hiding his identity for the second time, George was found innocent again after the team incarcerated Arsenio Castillo for Michelle's murder and for masterminding many of SOMBRA's schemes.

George became a suspect once again after the player and Carmen found a picture of him in the victim's briefcase. Once they found it, he came out from behind the trees, explaining he got a tip-off about the satellite that crashed and went there to investigate. Carmen was suspicious how he got that info since he was confirmed to no longer be an MI6 agent, but George refused to give away the identity of his informants. On top of that, he was unaware that the victim was sent to follow him.

George was spoken to again about a note from the MI6 about an operation labeled, "Falling Sky". He said he did not get it from them legitimately, he hacked the MI6's servers so he could get it. He was not ashamed of it, saying it was done with international security in mind since the MI6 does not do enough to stop SOMBRA, at least according to him. The operation they found was, according to him, merely a what-if scenario, the MI6 have not even bothered to monitor the satellite. When Carmen suggested that he was the one who took the hard drive on SOMBRA's behalf and killed Jean, George said he never found the hard drive and was too old to go around killing people.

George was found innocent a third time after the team incarcerated Anya Ivanova for Jean's murder and Asal's attempted murder. But the player and Carmen had to talk with him again about him meeting up with the victim. After explaining his excitement for finally facing SOMBRA head on, he said he and the victim were simply having a drink, unaware that Jean was a French spy. Then he noticed Jean turn around and swallow something, then he made a hasty exit, all of which he felt were suspicious. Since whatever he swallowed was likely in his stomach, Carmen said Grace should perform another autopsy on the victim's stomach to find what he swallowed. 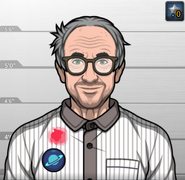 George, as he appeared in Total Eclipse of the Heart (Case #46 of World Edition). 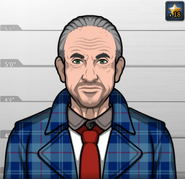 George, as he appeared in The King's Shadow (Case #48 of World Edition). 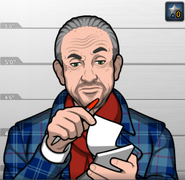 George, as he appeared in Operation Spyfall (Case #54 of World Edition). 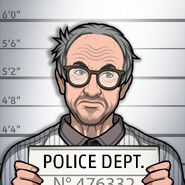 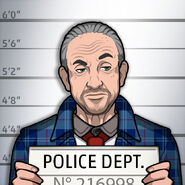 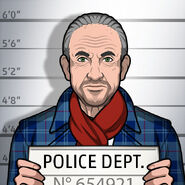 Retrieved from "https://criminalcasegame.fandom.com/wiki/George_Pryce?oldid=491949"
Community content is available under CC-BY-SA unless otherwise noted.