George is a 57-year-old historian. He has gray hair, a mustache and a beard. He dons a white shirt with a light gray tie under an olive coat and a dark brown waistcoat. He also wears a black top hat and a monocle, and is seen holding a blue quill in his left hand and a red book in his right. The fingers on his left hand are stained with ink.

In his first suspect appearance, it is known that George reads Malleus Maleficarum.

In his quasi-suspect appearance, he is seen without his quill and his book.

In his second suspect appearance, it is discovered that he has pharmaceutical knowledge and he drinks Corpse Revivers.

George became a suspect after Maddie and the player found his wallet on the scene of the crime. After being informed that a supposed witch had been murdered, he said that the victim must have been Aubrey Miller, as she was the only known witch around the town. He explained that the town had a long history of witch-hunts and that the dunking bar used to kill the victim was a relic from those times. He then told them that the victim was a herbalist and a midwife, prompting Maddie and the player to investigate her workshop.

George was spoken to again about a newspaper article about the victim accusing him of ruining the town. He explained that he was cultivating a supernatural reputation for Grim Chapel to attract tourists. However, when he asked the victim to wear a pointy hat for some witchy flair, even though he knew she wasn't really a witch, she refused and the two fell out.

George was found to be innocent after the team incarcerated Cordelia Putnam for Aubrey's murder. But he was later consulted with about "the Devil". He explained that the legend of the Devil was one of Grim Chapel's most famous tales. He explained that, if one wanted to "eliminate" someone, they just needed to leave a message for the Devil by the rocks of the pond. This prompted Maddie and the player to reinvestigate the pond.

After arresting Edgar Woe's killer, Annabel Leigh, Maddie and the player talked to Annabel about the Devil. Annabel said that the Devil pitied her due to her relationship and told her the instructions, providing her with a blood pump. She said that she had thrown away the potato sack the pump was in near the tavern.The two found the sack, which (per Viola) was stained with ink containing DNA from an older male. They then accused George of being the Devil, who denied the accusations, insisting that he had left a letter for the Devil at the tombstone. Maddie then decided to write a letter to the Devil herself.

George became a suspect again after the player and Maddie found his hotel room key. He said he was at the hotel for its history, and wanted to immerse himself in its ambience while he wrote his account down. As for the admiral's murder, he said he knew nothing about it since he had been in the hotel bar since morning.

George was spoken to again about a letter he wrote to the hotel telling them to evict the victim from his hotel room. He explained that many supernatural things have been known to occur in room 237, where the victim was staying. However, despite his request the victim refused to leave the room, which only infuriated George.

George was found to be innocent again after the team incarcerated Johnny Torrents for Oliver's murder. But he was later spoken to again by the player and Charlie about a machine he placed in room 237, one that measures the frequency of electromagnetic radiation. He said it was a Phantom Seeker, used to detect radation energy emitted by ghosts, which Charlie had trouble believing in. Charlie then informed him he would not be able to place his machine back in the room and the hotel will likely not permit it, as it only made spooky noises come from the room, but George said he would prove them wrong one day. 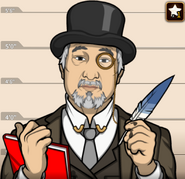 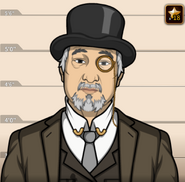 George, as he appeared in Graveyard Shift (Case #44 of Mysteries of the Past). 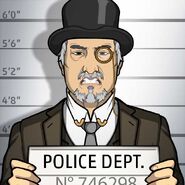 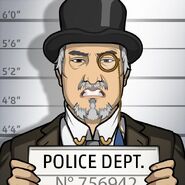