Agent George Mathison, appearing as a recurring character in Season 7 of Criminal Case, was a suspect in the murder investigation of property developer Jeremy Cross in The Curse of Black Ridge (Case #3 of Supernatural Investigations) before making quasi-suspect appearances in six differrent cases and four minor appearances over the course of the season.

George is a 48-year-old FBI Agent. He has black eyes and short, graying black hair. He wears a light blue shirt and a blue tie with brown stripes under a dark blue suit jacket with a gold FBI badge on his left lapel. It is known that George reads The Spectral Plane and is right-handed.

George became a suspect after he informed Luke and the player that Black Ridge was a federal crime scene and took them away for interrogation. He revealed that he had been contacted by Nevada PD after the victim's wife, Anika Cross, had called the police. After being questioned about the body's location, Luke admitted that it was in one of the team's trailers, claiming that they were ghost town historians. George then demanded the team to turn over the body immediately and leave Black Ridge. After their interrogation, Luke and the player informed Chief Arrow about what had happened, who told them that he would deal with George.

George was spoken to again about the victim being a suspect in a series of murders in Black Ridge. After Luke and the player returned his briefcase to him, they asked George about Jeremy being a suspect. Telling the team that it was classified information, he revealed that they had interviewed Anika Cross, not Jeremy. This prompted Luke and the player to question Anika.

George was found to be innocent after the team incarcerated Rick Lewis for Jeremy's murder. Later, the team managed to put the soul of ghost Nathaniel Mason, the true killer, to rest. After doing so, George appeared before the team and demanded that they explained themselves to him. He was unable to make the team crack, resulting in him promising them that they had made a powerful enemy. He then demanded that the team left Black Ridge before he had them arrested.

After arresting Paul Etter's killer, Gwen discovered that her girlfriend, gold magnate Justine Bankston, had been arrested by the FBI for murder. They found George's laptop at Tacos Pueblo. Per Hope, there was undeniable proof that Justine had killed her sister. However, the detail that a tarot card had been slipped into the victim's pocket prompted Gwen to accuse Jesse Adams as the detail had reminded her of the murder that he had committed. Gwen and the player tried to convince George that Jesse was the killer, but George revealed that he was locked up in Saguaro Penitentiary. He then retook his laptop and ordered the team to get out of his sight.

After arresting Dr Lucrezia Stein's killer, George interrupted Adam Enstrom's funeral and began to interrogate Ben and the player. Telling the team that he had caught them in possession of human remains for the second time, he threatened to send them to the Bureau for interrogation. Patient Savannah Austin then told George that she could vouch for the player. She explained that the only culprit was her late mother and offered to show him the patient files so that he could close the asylum down. George then told the player that he had his eye on them.

Mid-investigation, George barged in on the team's investigation and arrested Chief Arrow for possession of R.J. Fielding's body.

After discovering the identity of Fielding's killer, Felix and the player pleaded with George to release Chief Arrow. They revealed that Luke had been possessed by a ghost, which they could prove. They also told George that they could hand him a human killer. Skeptical, George released Chief Arrow. George then accompanied the team's investigation.

After they found Abigail Riley's notebook, the team tracked down Axel and Luke. After George detained Axel for the murder, Felix performed the exorcism on Luke and drove Abigail's spirit out of his body. Shocked by what he had witnessed, George collapsed. However, Chief Arrow quickly brought George to his feet.

George and the team later interrogated Axel and demanded to know how Abigail could find peace. After they found her ring, they summoned Abigail's spirit. Chief Arrow returned Axel's ring to her and told her that one day, she would reunite with him in the afterlife. Abigail told the team to tell Axel that she would wait for him and disappeared. George then apologized to the team for not believing them before.

Mid-investigation, George told Luke and the player that he had managed to use his influence to grant the team access to racer Jerry McKenzie's body. He revealed that Chief Arrow had contacted him and told him about their suspicions that the murder had a supernatural element. Since their investigation near Devilman's Bridge, George had learned not to question Chief Arrow on such matters and assisted the team in giving them access to the body.

During the investigation, Luke and the player sent a restraining order taken out by the victim, farmer Wyatt Ewing, to Hope for analysis. When they went to collect the results, they encountered George, who explained that he had been contacted by Hope to help her uncover the subject of the restraining order. He informed them that the restraining order had been taken out against environmental activist Zeke Davis, prompting Luke to thank George for his help.

After arresting Dan Kelly's killer, Gwen and the player found a box of cremated human remains whilst looking for the remains of the real Alice Kelly. They sent the remains to George for analysis in a FBI lab. Confirming that the remains belonged to Alice, George mentioned that the Kellys had a son: Kevin Kelly. After learning that the team had not encountered a son in their investigation, George feared that Kevin was missing. Gwen and the player spoke to association head Florence Brucker about Kevin. She told the team that the parents had claimed that he had gone to live with some distant relatives, although she had never believed them.

After arresting Todd Anderson's killer, George told Gwen and the player that he had looked into Kevin's disappearance and had discovered a couple of similar cases regarding missing children in the Midwest. He revealed that one of his leads had led to Todd, prompting Gwen and the player to look around Todd's apartment.

After arresting Belinda's killer, Felix and the player found young witch Avery Mitchell and the rest of the kidnapped kids. Chief Arrow contacted George to take the kids home. After Avery and the player helped George find his car keys, George told the kids that he was taking them home, with their first stop being Chicago.

As a FBI Agent, George has the responsibility of taking care of necessary analyses that are beyond the capabilities of the Supernatural Hunters, and to inform the team of such results after a certain amount of time or a speed-up process using Criminal Case Cash. His task-wait rates vary depending on the difficulty of the task, but they all cost 1 Criminal Case Cash per 30 minutes.

Below is the list of analyses George performs throughout the course of the game: 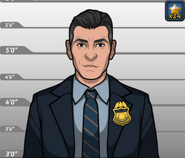 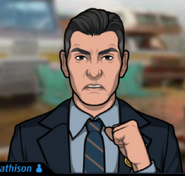 George, as he appeared in Dead Heat (Case #12 of Supernatural Investigations). 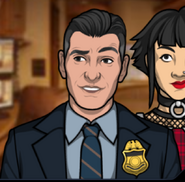 George, as he appeared in Winter Murderland (Case #14 of Supernatural Investigations). 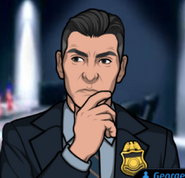 George, as he appeared in This American Death (Case #16 of Supernatural Investigations). 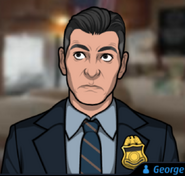 George, as he appeared in No Leg to Stand On (Case #21 of Supernatural Investigations). 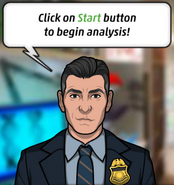 Notifying the player about the time remaining for the analysis to complete.
Add a photo to this gallery

Retrieved from "https://criminalcasegame.fandom.com/wiki/George_Mathison?oldid=524729"
Community content is available under CC-BY-SA unless otherwise noted.