George is the son of Charles Dupont and Maddie O'Malley. He has blond hair and is seen wrapped in a cloth.

In the middle of investigating Inspector Jaubert's murder, Maddie went into labor in Lady Highmore's house. Far from the hospital, Lady Highmore decided to call Charlie and help deliver the baby herself. After a few minutes, Charlie and the player heard the baby's cry. Charlie then went to Maddie and reunited with her. The couple then declared that his name would be George.

Later, while Isaac and the player were in the resistance headquarters arresting Giulietta Capecchi for the murder, the Justice Corps stormed the Squad's airship, having gotten a tipoff from Officer Smythe that they were sympathetic to the resistance against Mayor Lawson. While Charlie and Dick were able to escape, George, his mother and the rest of the Squad were arrested and thrown in the dungeon under the town square to await their execution the day after.

Worried that Charlie and Isaac did not return from the airship, Maddie and the player went to the airship, taking George with them. The three of them then found Charlie shot in the heart in his own lab. Because Maddie wanted to be the one to investigate Charlie's death, she entrusted George in Highmore's care.

Mid-investigation, Highmore told the team that Judge Umbright would visit her estate. Later, thanks to Dick's recklessness, Umbright was able to kidnap George before leaving Highmore's. While in despair, Maddie was convinced to continue the investigation while they search for George and Umbright.

After Charlie's killer was arrested, Dick informed the team that Umbright arranged a negotiation in Smokey's Café, trading George for the Squad to surrender to her. Later, after the team made some necessary preparations, they appeared but refused to turn themselves in until Umbright return George to Maddie. After mother and son reunited, Rose was able to trick Umbright into shocking herself unconscious with George's baby rattle which she had rigged to release an electric shock.

A few days later, after Lawson's downfall, George and Maddie attended Charlie's funeral with the rest of the Squad. The two of them were then left alone to say their personal goodbyes to Charlie, with Maddie promising that she would take George to visit Charlie regularly. The following morning, Maddie stumbled upon one of Charlie's films labeled "Charlie's Chronicles." She watched it with George and the player, with the film turning out to be Charlie's first of his many planned video diaries detailing his adventures with the Squad. In the film, Charlie said that he was proud to be George's father.

A few days after watching the film, Maddie told the player that she had been reading the adventures detailed in Charlie's journal to George. 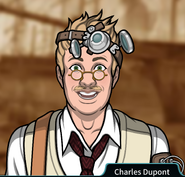 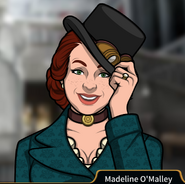 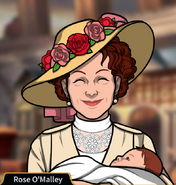 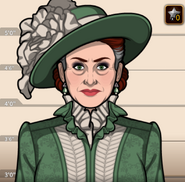 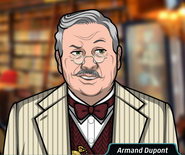 Armand Dupont, George's grandson as seen in the present day. 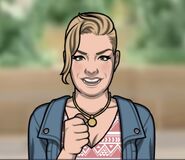 Alessia Dupont, George's granddaughter as seen in the present day.
Add a photo to this gallery

Retrieved from "https://criminalcasegame.fandom.com/wiki/George_Dupont?oldid=548328"
Community content is available under CC-BY-SA unless otherwise noted.