Stab wound to the abdomen

George was a 45-year-old newspaper owner. He had graying blond hair. He wore a beige blazer with a guano stain on his left shoulder and a gold handkerchief in his left pocket over a sky blue shirt with a gold tie. It is known that George suffered from seasickness and knew ballroom dancing and art.

George became a suspect after the player and Maddie found a newspaper of him with the victim at one of his exhibits. He was surprised to hear he was killed, saying he knew the victim from meeting him as his gallery openings as he collected his work. Though he was sad that Concordia was losing his talent to Europe, it made him sadder to know Theo's talent would be lost to the whole world.

George was spoken to again regarding a message he wrote to the victim saying he was not happy with Theo's decision to leave. He did not bother to hide how furious he was, saying he invested so much into his work only for him to walk out on him. He explained that he decided to fund Theo's career as he fancied himself a connoisseur of art, and collected and exhibited his work. With all the money he put into Theo, George felt he practically owned him, but he would not go as far as murdering him despite the fact his collection is now worth more with Theo being dead.

George was found to be innocent after the team incarcerated Renée Daucourt for Theo's murder. But with some help from Evie and Diego del Lobo, the team needed to speak with him about letters he sent to Giulietta Capecchi due to the fact that Giulietta was proven to be a link between the previous murders committed at Mr Alastor's parties. He said he sent those letters mostly because of the sense of mystery, and felt Giulietta needed to be respected with all the people looking down on her because of her family. Though at first, he confessed to being Mr Alastor, his confession was immediately recanted after the murders were brought up. He was put into custody for the time being, but after receiving an invitation from Alastor's driver, George was released.

George fell into the pool at Archie Rochester's mansion after being fatally stabbed in the abdomen. Per Dick, George was hit in the head with a blunt object before being stabbed in the abdomen. After being wounded, he tumbled and fell into the pool. In George's rigid hand, Dick found a snuff spoon he had ripped from the killer. This meant that the killer snuffed tobacco.

In the mansion's hall, the team found a champagne saber which (per Viola) had the victim's blood—thus filing it as the murder weapon. Per Rose, the saber had billiards chalk in its handle, which meant that the killer played billiards.

George was an attendant at Mr Alastor's final party at Archie Rochester's mansion. At the party, George broke a bust of Elmer Wentworth in a fit of rage. He also made advances on Giulietta Capecchi, who rebuffed him with a Kiss of Death. Furthermore, George cheated Giulietta's father, mobster Vittorio Capecchi, out of a substantial amount of money in a business deal turned sour.

George was the owner of the Concordian Gazette. He attended the party with his employee, journalist Katherine Woolf, who was planning to write a dramatic exposé on the Alastor murders. George was also accused of slander by the Rochester family after he dug up dirt on Monty Rochester, Archie Rochester's late uncle.

The killer turned out to be Wentworth.

Upon admitting to the murder, Wentworth drank a bottle of poison to take Mr Alastor's secret to the grave. He later succumbed to the poison's effects before the team could find out more. The team then deduced that Wentworth would go as far as suicide only for Archie, his master.

Later, when the team discovered his identity as Alastor, Archie said that Wentworth stabbed George with a champagne saber because he thought that his master would kill the media tycoon for courting Giulietta Capecchi. 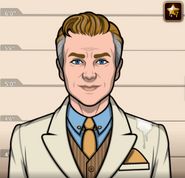 George, as he appeared in That Sinking Feeling (Case #11 of Mysteries of the Past). 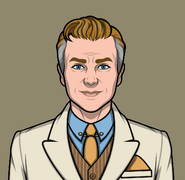 George, as he appeared in Behind the Mask (Case #12 of Mysteries of the Past). 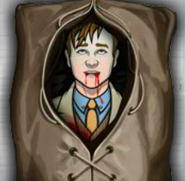 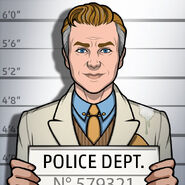 Retrieved from "https://criminalcasegame.fandom.com/wiki/George_Buchanan?oldid=532219"
Community content is available under CC-BY-SA unless otherwise noted.