Freeman is a 59-year-old former army general with short grey hair and blue eyes. He is seen wearing a white sleeveless shirt with army badges on it, wears dog tags around his neck, and has scars on his face and right arm.

In his first appearance, it is known that Freeman is right-handed and eats space food.

In his second appearance, he wears night vision goggles. It is discovered that he has allergies.

In his third appearance, he wears a scarf around his neck and has a chemical stain on his shirt. It is revealed that he has radiation sickness, is a Meteor Systems employee and has a generator.

Freeman was first interrogated after Amy Young and the player managed to find the murder weapon, a laser gun. He was infuriated at the team for investigating the war room without his permission, and at Colonel Spangler for allowing them access. When asked about the murder weapon, he claimed it was in the desert already broken, so he brought it back to the base. When Amy asked if he killed Nelson, he responded saying he did nothing of the sort and he was not interested in what the army was developing.

The general was due for a second interrogation when the team found fingerprints from his right hand on a stress ball with the victim's face on it. Freeman was asked to be First Officer on the expedition to Mars alongside the victim. Because of that, he had to work under the victim, which annoyed Freeman to no end. This was because PASA needed to protect the astronauts from possible alien life. But he once again told the team that he was not responsible for Nelson's murder.

Freeman was found innocent after Brad Raybury was indicted for grand homicide and unauthorized use of military property, but was fined by Chief Marquez for his willful impedance of a civilian murder investigation.

General Freeman became involved in another murder investigation when Hannah Choi managed to find a video of him giving a speech to his soldiers. He went on to say that they were tasked to capture the alien that Colonel Spangler released, the team assumed he meant Randolph. He was furious that the team entered Area 61 and confiscated military property. When told about Randolph's murder, he explained that the army had intel that he was still around Rhine Canyon and they were trying to bring him back. He then demanded that everything pertaining to the investigation be brought to Areas 61 including Randolph's body, but Amy declined stating that people may begin to snoop around the base.

Freeman was due for another interrogation after the team found a picture of him holding a small spaceship, taunting Randolph to try and get it back. When the team talked to him about it, he explained the photo was meant as a means to lure Randolph to the base. Knowing Randolph was an alien, Freeman believed that he needed to be contained. When Amy said she was skeptical about Randolph being an alien, the general proclaimed that people would lose control over finding out the existence of other intelligent life forms. He said that he was glad Randolph was taken out, even though he did not do it himself.

General Freeman was cleared of all suspicions once Dr. Jarvis Donne was found guilty of autopsying Randolph. However, that would not be the last bit of trouble he would cause for the team. After finding out that Randolph was actually an alien, the team returned to Area 61 to find his spaceship. Once they found it, the general found them and demanded an explanation for why they were there. He figured out that they were taking the spaceship back to Randolph, so he threatened the player and Amy to bring the alien to him or else. Amy then stood up to Freeman saying that he was not the only one working for the government. She then fined him for threatening a police officer and they left with the spaceship in hand.

Freeman was found to be in another murder investigation after the team found a satellite image of the victim. According to Yann Toussaint, his DNA was on the picture, which proves that he spied on the victim. At first he tried to avoid it, but he gave up and said that it was his job to protect David. Though he admitted that he failed on his end, he informed the player to leave The Wastes due to it being too dangerous.

Amy and the player spoke to General Freeman again after they found a Meteor Systems tablet, that was last accessed by Freeman. Due to what happened in Rhine Canyon, he was discharged on medical grounds, but he could not remember what happened. He then found a job in private security and was employed by Meteor Systems to monitor the victim. Amy wondered why Meteor Systems would need an ex-soldier to spy on David and what for, but Freeman did not have any idea either.

Freeman was found to be innocent again after the team arrested Jess Prakti for David's murder. He was later spoken to one last time regarding the precise location of Meteor Systems' headquarters. Freeman questioned why they needed his help, but Amy mentioned that Meteor Systems was up to no good, and reminded him that being a soldier meant keeping the nation safe. The general agreed to take them to the headquarters but said that he would not enter the base, and regretted working for Meteor Systems as he felt they were up to no good as well. 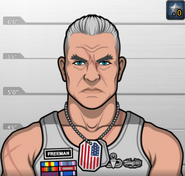 Freeman, as he appeared in Dead Space (Case #43 of Pacific Bay). 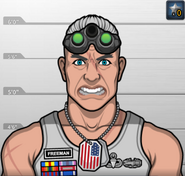 Freeman, as he appeared in No Place Like Home (Case #45 of Pacific Bay). 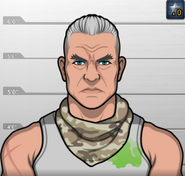 Freeman, as he appeared in Into the Wastes (Case #57 of Pacific Bay). 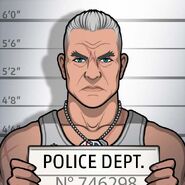 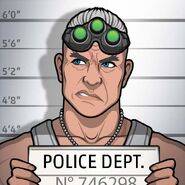 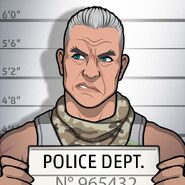 Retrieved from "https://criminalcasegame.fandom.com/wiki/General_Freeman?oldid=437615"
Community content is available under CC-BY-SA unless otherwise noted.