Gaston Dumas was a suspect in the murder investigation of teen soap sensation Jenny Galguera in Once Upon a Crime (Case #32 of Pacific Bay).

Gaston is a 45-year-old French novelist who's the author of The Glass Princess, suggesting that he read the fairy tale numerous times in his life. He has brown eyes, brown wavy hair, and a 5 o'clock shadow. He wears a white shirt under a brown coat which has a blue pen tucked into the right pocket. Besides that, he is seen donning a gray wristband and seems to be smoking a cigarette. He is also seen holding a copy of The Glass Princess fairy tale with his right hand. He has chest hair, and wears a silver chain necklace around his neck and a gold earring only on his right ear. It is known that Gaston has read The Glass Princess.

Gaston found himself in trouble after Frank and the player found a music sheet in the Mr Sparkles movie set of The Glass Princess, where lead actress Jenny's murder took place. The player found the music sheet to be an original score written by Gaston—a feat which prompted a discussion with the book's author.

Frank and the player trailed Gaston in the library with Frank wanting to know if Gaston was the book's author, to which Gaston admitted he wrote the book as The Glass Princess is what helped him make a living. Frank informed Gaston that Jenny was murdered in the movie set; Gaston felt Jenny's murder was entertainment since the score he wrote was meant to be the song of an evil witch. Frank did not like the bad omen Gaston announced in the witch's song, and given the conversation, Frank and the player agreed that the killer read The Glass Princess from head to toe.

Gaston found himself in trouble for a second time after Frank and the player found a scripture of the live film's adaptation of The Glass Princess in which he allegedly hated the way the movie's producers edited the nature of the story. Gaston confirmed that he wrote that message on the script because the victim requested the story to be changed to appeal to a younger audience. He further stated that the Glass Princess is a character who dresses up as a man and seduces her mother to release her from a possessive spell. Moreso, Gaston stated that the Glass Princess is a war maiden as opposed to what Jenny Galguera was. He totally hated the wanton editing of the live film to forego the dark, complex nature of the story he originally wrote.

Gaston was found innocent after Miranda Galguera was arrested for the murder. Later on however, he got Russell's attention after he was caught by the player stealing and destroying a script Horace Foster valued. Gaston was brainwashed when Russell and the player subdued the author for script theft—a feat Horace thought was unusual in Ivywood. The script was returned to Horace, but what the brainwashed Gaston demonstrated during the moment of script retrieval left a lot to be desired. 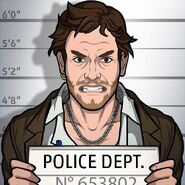 Gaston in a promotional still of Dead Carpet.
Add a photo to this gallery

Retrieved from "https://criminalcasegame.fandom.com/wiki/Gaston_Dumas?oldid=507999"
Community content is available under CC-BY-SA unless otherwise noted.