"Smuggler Queen" Frida Cruz was a suspect in the murder investigation of journalist Jude Connelly in Diamond in the Rough (Case #40 of World Edition).

Frida is a 41-year-old infamous smuggler. She has blonde hair which she puts into a ponytail, and a sunburn on her face. She dons an olive green tank top, a light green vest with a belt strapped around it and a green cap covered in diamond dust. It is known that Frida eats caterpillars.

Frida became a suspect after Carmen and the player found a satellite photo with a message from the victim reminding him to meet with her. When informed of Jude's murder, she said she had no part in it, and that the victim found them out claiming he wanted to write a book about smugglers in Africa. Unfortunately, he was unable to gain her trust even with offering a map of the mine, and she sent him away from the camp.

Frida was spoken to again about a recorded conversation she had with the victim where she threatened his life. She admitted that she wanted to kill him just for stepping into her territory like that, but if she did it would have been at the smugglers' camp where no one would find the body. She said the two of them had struck a deal, she would take a percentage of the proceeds from what the victim managed to smuggle, and Jude got to keep his life.

Frida was found to be innocent after the team incarcerated Olivier Feraud for Jude's murder. She was later spoken to about a fake passport she placed in her belongings as she was about to escape. She said she was running off because of another more organized operation came along to the diamond smuggling business, SOMBRA. Frida knew well enough to stay away from them since she heard stories of trained assassins and control over satellites. Due to her counterfeit luxury bag filled with ingots, Carmen and the player arrested Frida for smuggling. 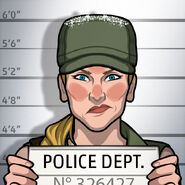 Retrieved from "https://criminalcasegame.fandom.com/wiki/Frida_Cruz?oldid=408323"
Community content is available under CC-BY-SA unless otherwise noted.