Fredo Mancini (1982-2014) was a suspect in the murder investigation of local Irish priest Angus O'Brian in Spineless (Case #14 of Pacific Bay) and the killer of Daily Dawn editor-in-chief Vito Pioni in Killing Time (Case #16 of Pacific Bay) before being shot to death during his trial.

Fredo was a 32-year-old Italian man known to be the leader of Inner Chaos, an anarchist organization based in Inner City, the third district of the city of Pacific Bay. He had brown hair tied into a ponytail at the back with shaved sides, and sported a light stubble with a thin mustache. Besides that, he had a muscular body with a dark bruise on his chest, and sported tattoos on both of his arms. Fredo donned a feather collar black vest with parts of it displaying a camouflage pattern and several badges. He wore several earrings and a silver chain around his neck, and sported black fingerless gloves.

In his first appearance, it is known that Fredo used a jump rope.

In his second appearance, it is discovered that he ate lasagna, drove a scooter and drank espresso.

Yann described Fredo as "some tough guy whose criminal record is filled with little larcenies."

During the Additional Investigation, Amy and the player investigated Jacob Fishman's synagogue upon Eva Breitman's request. Carefully observing the scene, the team managed to find a broken graffiti mask, only to restore it and then dust it for fingerprints. After the examination, the mask was shipped straight to Yann Toussaint for analysis.

After long hours of analysis, Yann confirmed the fingerprints belonged to none other than Fredo Mancini, leader of the Inner Chaos, much to Chief Marquez's dismay.

Chief Marquez did not hesitate to have a talk with Amy and the player about Fredo shortly after, and stated how she believed that the police force would be in for a heap of trouble if Fredo was still the Inner Chaos' leader as she had faced difficult moments dealing with the man in the past, and concluded that Fredo was a man who could not and should not be trusted.

Fredo was confronted by the team for the first time soon after Russell flagged a notebook as an anarchist diary written by Inner Chaos with beliefs that they were the chosen ones of Inner City. Fredo refused to deal with Frank and the player but Frank countered that their concern was Angus's murder. Fredo saw the dead priest during the parade with beliefs he committed no transgression.

Hannah activated the team to take action against Fredo prior to his second conversation given his takeover of Angus's church to commit arson as a vehicle to start a revolution. Frank did not hesitate to arrest Fredo for attempted arson of a church as the team saved the church from being burned to ashes by Fredo. The team took Fredo into custody before their second investigation of Angus's church.

Fredo lambasted the team for not allowing him to burn down Angus's church since Angus's death served as an arson license for Fredo but Frank detested Inner Chaos' anti-religious games with beliefs that church arson was the easiest way to attract authoritative attention. Fredo believed that he was above the police and the law but Frank grew tired of Fredo's games—prompting him to retain Fredo in custody for attempted arson.

While Fredo was not guilty of murder at the close of the case, he was still locked up due to the stunt intercepted by Hannah on-sight. Chief Marquez was prompted to take Fredo out of custody, but wanted to make sure he was sane before the police did so. Fredo wanted to be out of custody but Frank already grew tired of Fredo's bickering every time he had to be questioned by the authorities. Fredo was able to distract the team out of his sight by suggesting them to keep an eye on the church just in case Fredo's organization plotted to vandalize the church further.

Much to Frank's relief that no one touched the church since the interception, the player found a handwritten anarchist manifesto by Hannah confirmed to be written years before events of the case per Russell. Hannah butted in with fury realizing Inner Chaos dug her old paper up grounds for Hannah to confront Fredo about her old handwritten manifesto before she changed sides. Fredo thought Hannah's old manifesto was his present but Hannah, in anger, demanded the schemes Inner Chaos had up their sleeve. Fredo thought Hannah liked Inner Chaos more as all he believed was that Hannah betrayed herself but Hannah responded that she was sick and tired of Inner Chaos' ways of "making things right by creating violence."

Fredo initially found himself in serious trouble when Russell managed to confirm Fredo as the one who wrote the check to Vito Pioni, prompting Amy and the player to ask for a reason as to why he would write a check payable to the order of Pioni. Fredo had to pay rent for space he leased from Pioni to provide Inner Chaos a stronghold, but Amy was puzzled because she thought Pioni would not allow Fredo to rent room and board from the victim. Fredo felt Inner Chaos had every right to be tenants in spite of the victim's opposition to allow Fredo to rent room and board, but Vito went far to kick Fredo out of the apartment complex—even attempting to take Fredo's scooter away through the help of the traffic police—flagging Fredo as someone who rode a scooter.

Fredo was in further trouble once Amy and the player found a list of enemies forensically dusted back to legibility by the player (in which Fredo flagged the victim, Chief Marquez, and Judge Dante as enemies of the revolution). Fredo was mad as he thought Amy and the player bugged him one too many times, but Amy was not up to playing Fredo's games, as she demanded a reason as to why Fredo had to write a list of enemies, in which Fredo believed that if he knew who his enemies were, he would also know himself—a trait he got from his parents years before this case ensued. Fredo told the team his next target would be Chief Marquez, but Amy snapped at Fredo that the player would be willing to protect the entire police department at the cost of their life just to protect Chief Marquez from harm.

The real roller coaster ride started when Amy and the player had enough evidence to incriminate Fredo as Vito Pioni's killer. As Amy and the player read Fredo's rights to remain silent, he thought the police lied to him when Amy and the player found him guilty of grand homicide, but Amy managed to present Fredo with evidence that incriminated him as the killer—a feat Fredo refused to feel guilt for as he firmly believed that the Daily Dawn Newspaper of Pacific Bay were "right-wing pigs", since Inner Chaos believed the Daily Dawn used to tell the most lies (even when compared to the police, politicians, and banks) in Pacific Bay, moving Fredo to cross the line to commit Vito's premeditated murder. Fredo's motives disgusted Amy, so she and the player detained him to face trial.

Hannah, Chief Marquez, Amy, and the player then attended the trial for a hearing on murder charges Fredo would face, in which Fredo called Judge Dante a "fascist", furthermore saying the people who could not travel using Inner City's Grand Station were lucky because Fredo used Vito's premeditated murder as a trap. Fredo intended to commit suicide bombing to kill the police, Judge Dante, the press, and the politicians inside one court house to stimulate Inner Chaos' revolution agenda. Amy pleaded with Fredo to drop the suicide bombing attempt but Fredo asked Amy what time it was, to which Amy replied it was 11:05 AM, Pacific Bay time. As Fredo attempted to commit suicide to kill the government affiliates in the court house, Hannah clutched Amy's gun and shot Fredo down with a bullet to the brain, averting a forced unrest through a Kamikaze-style act and saving the courthouse in spite of the shock she sustained by having to shoot down a criminal to save a stronghold. Alas marks the end of Inner Chaos. 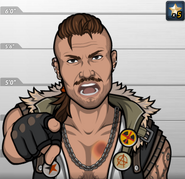 Fredo, as he appeared in Spineless (Case #14 of Pacific Bay). 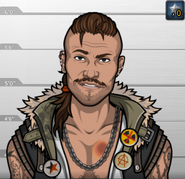 Fredo, as he appeared in Killing Time (Case #16 of Pacific Bay). 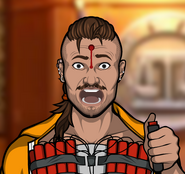 Fredo was shot down during an attempted suicide bombing to escape indictment for the murder of Vito Pioni and an attempted attack on the Pacific Bay government. 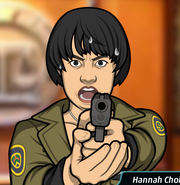 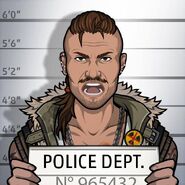 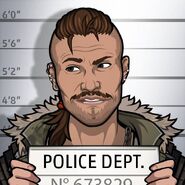 Retrieved from "https://criminalcasegame.fandom.com/wiki/Fredo_Mancini?oldid=475056"
Community content is available under CC-BY-SA unless otherwise noted.