Fred Drucker was the victim in Domesday (Case #31 of The Conspiracy).

Fred was a manager at DreamLife with short brown hair and gray eyes. At the time of his death, he wore a three-piece suit consisting of a white shirt, a black jacket, and black slacks. Furthermore, he donned a red tie with vertical gray stripes and carried a matching handkerchief in his left breast pocket. Additionally, he wore black shoes and sported an ID badge on his right lapel.

Fred's electrocuted body was discovered on one of DreamLife's platforms inside the dome. Martine immediately confirmed that the victim was electrocuted with a stun gun. However, the markings didn't correspond with any available stun gun on the retail market, meaning that it was homemade. As the killer made the stun gun themselves, Martine confirmed that the killer had knowledge in electronics.

Later, Jones and the player found a strange device in the recreation room. Rita confirmed the device to be the killer's homemade stun gun. After sending some fibers that had gotten stuck in the device to Amir, Rita informed the team that the fibers came a blue buttoned-down shirt. This allowed Rita to deduce that the killer wore a blue shirt.

Fred was found to have angered several people under the dome, including his own boss, Dreamlife CEO Rozetta Pierre, who claimed that Fred worked very hard, but when he asked for evenings off, it made Rozetta angry. They also learned that Fred had angered DreamLife's dome architect Dan Scruffinsky, by claiming that he was in charge of the dome, despite Dan being the one who built the dome from scratch. Fred also disrespected regulation rules, which made security guard Barb Bellamy angry as she wanted him to behave better due to his total lack of respect for her authority. They also found out that Fred angered two scientists, Dr. Ernesto Vega by causing problems in Ernesto's scientific work and Rupert Winchester (disguised as Mortimer Pickering) by making fun of his accent and claiming he was old and boring.

The killer turned out to be Dan.

After admitting to the murder, Dan told the team that Fred was going to falsely report him to Rozetta for not taking good enough care of the dome, causing him to be fired and Fred to be put in charge of the whole dome. Not wanting to be banished from his dome, Dan had electrocuted Fred with a homemade stun gun. Judge Powell sentenced Dan to 25 years in prison. 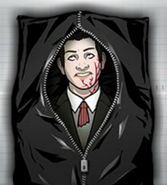 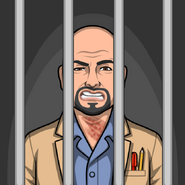 Dan Scruffinsky, Fred's killer.
Add a photo to this gallery

Retrieved from "https://criminalcasegame.fandom.com/wiki/Fred_Drucker?oldid=486176"
Community content is available under CC-BY-SA unless otherwise noted.