Franklin Caldwell was the killer of quarterback Troy Takiguchi in Dead Man Running (Case #34 of Grimsborough).

Franklin is the 56-year-old coach of the Grimsborough Quails. He is bald and has a small mustache. Franklin wears a large headset with one headphone and a microphone. He sports two thick black lines on his face. He also wears a blue bowling shirt with white trim around the collar and shoulder lines. On the right side of the shirt, there is a green grass stain and under it, is the logo of the Grimsborough Quails. It is known that Franklin drinks sports drinks and eats spicy food.

Franklin was interrogated by Jones and the player after his team's star quarterback, Troy Takiguchi, was murdered on the football pitch.

At the climax of the investigation, all evidence pointed out to Franklin, whom he accidentally killed Troy. He was preparing his team for the upcoming match and discovered that there were talent scouts in the audience. Troy's skills were amazing, but his agility and speed needed improving. So Franklin sneaked into the infirmary where Troy's insulin was being distributed. He broke stole a bottle of EPO and mixed it with Troy's insulin, and then, distributed them to the victim, without knowing the effects. After Troy died and the team were getting closer to the truth, Franklin attempted to frame the nurse, Karimah Breen for the murder by placing the EPO in a fridge.

Since Franklin's actions also contributed to an act of reckless handling of students, the Judge sentenced him to 4 years in prison with an indefinite cessation of his teaching license. Franklin, sentenced to 4 years in jail with an indefinite cessation of his teaching license for the murder of Troy Takiguchi. 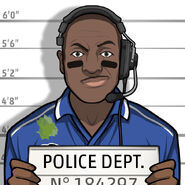 Retrieved from "https://criminalcasegame.fandom.com/wiki/Franklin_Caldwell?oldid=476654"
Community content is available under CC-BY-SA unless otherwise noted.