Frankie Paisley was the killer of actress Lorna Westerberg in What Happens in Vegas... (Case #9 of Travel in Time).

Paisley is a 46-year-old card dealer working for Peacock Hotel and Casino with black hair and green eyes. He is seen wearing a formal white shirt with gray buttons, a purple bow tie and a black waistcoat with multiple purple patterns. Additionally, he sports cufflinks and a watch. He is also seen holding a playing card. It is known that Paisley eats shrimp cocktail, is superstitious and has seen What's Up, Daddy-O.

Paisley became a suspect after Nebet and the player found his name tag at the scene of the murder. He claimed to had seen the moment of the murder, saying that a crowd had formed around Lorna before she had been shot, prompting the crowd to scatter. He then told the team that he had not seen who had shot her.

Paisley was spoken to again about the threat that he had received from the victim. He explained that Lorna had kept losing at his roulette table. As a sore loser, she started raging at the table and scared the other customers away, eventually threatening to burn the casino down.

In the end, it was proven that Paisley was Lorna's killer. Paisley admitted that Lorna had asked him to help her cheat, splitting the winnings in return. However, Lorna had refused to pay him his half of the money. Disliking the jeopardizing situation he was in, Paisley shot Lorna to death. Nebet and the player then took him to the local authorities. 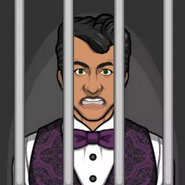 Paisley, taken to the local authorities for the murder of Lorna Westerberg.
Add a photo to this gallery

Retrieved from "https://criminalcasegame.fandom.com/wiki/Frankie_Paisley?oldid=490809"
Community content is available under CC-BY-SA unless otherwise noted.