Lieutenant General Frank Vogel was the victim in Welcome to Concordia! (Case #1 of Mysteries of the Past).

Frank was the Lieutenant General in charge of the New Haven Center. His job entailed inspecting immigrants entering Concordia before they were allowed to pass through. He had short brown hair with sideburns, brown eyes, and a mustache, and donned a dark green uniform, which was adorned with three medals, before he died.

Frank was found on the docks with strange discolorations and blood coming out his mouth. According to the coroner, Richard Wells, the victim was poisoned with arsenic trioxide at least ten hours before his death. He also found traces of brimstone and lard in his stomach, both ingredients used to create a topical ointment used to reduce itching caused by head lice. The substance was ingested around the same time as the arsenic, so that meant it came from the killer, which meant the killer had head lice.

Later, Dick came in saying he found traces of alcohol in the victim's blood, and that alcohol was drank at the same time the arsenic was. Maddie suspected it came from the pub, so she and the player investigated it again and found a vial of arsenic, it was later filed as the murder weapon. A substance was collected from the vial and then sent to Viola Pemberton, who said the substance was corn starch mixed with water. She explained it was used to starch white collars and give them a cardboard-like consistency to look smart. This meant the killer wore a starched white collar.

At the scene of the crime, the team encountered Irish priest Father Donovan, who pointed the team in the direction of The Old Ale House, a tavern. It was later revealed that Father Donovan had been involved in an altercation with Frank due to his dictatorial attitude over the immigrants. One of those immigrants was Harriet Patrick, whose pet cow, Daisy, had been confiscated by Frank to be quarantined.

At The Old Ale House, the team questioned tavern owner Walter Lombardi, who argued with Frank over the amount of Irish people that he was letting into the city. They also questioned dock worker Seamus O'Neill, who attempted to bribe Frank to allow his mother into the country. The team also interrogated nurse Nellie Mortimer, who was revealed to be Frank's ex-girlfriend.

The killer turned out to be Nellie.

Nellie denied the accusations, but eventually admitted guilt. She said that during her affair with Frank, he had given her syphilis. Because of his apathy towards the women he slept with, Nellie put arsenic in his stout to stop him from infecting more women. Judge Takakura then sentenced her to 13 years in prison. 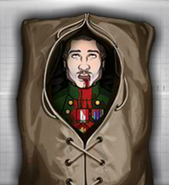 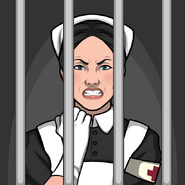 Nellie Mortimer, Frank's ex-girlfriend and killer.
Add a photo to this gallery

Retrieved from "https://criminalcasegame.fandom.com/wiki/Frank_Vogel?oldid=520229"
Community content is available under CC-BY-SA unless otherwise noted.