Frank Janovski was a suspect in the murder investigation of company director Gordon Michelli in Death by Crucifixion (Case #7 of Grimsborough).

Frank is a 44-year-old man with graying brown hair around the sides and bald on top and a 5-o' clock shadow. He was the project manager for the "Red Company" construction business. He wears a grey coat over a blue jumper and white shirt. It is known that Frank drinks whiskey and takes Nevrax. 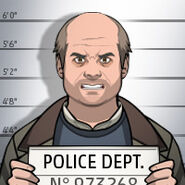 Retrieved from "https://criminalcasegame.fandom.com/wiki/Frank_Janovski?oldid=531301"
Community content is available under CC-BY-SA unless otherwise noted.