Zara Tien (All Chapters)
Orlando Ordelaffi (The Art of War 3)
Princess Torgoljin (2 tasks in The Art of War 3)
For Whom the Bell Tolls is a case featured in Criminal Case as the twenty-eighth case of Travel in Time (Season 6) and the three-hundred nineteenth case overall. It takes place in Medieval Asia.

Zara and the player headed to an opera house in Xiangyang, Chinese Empire to meet with Emperor Lizong of Song dynasty and determine the location of Ogedei Khan's kidnapped daughter, Princess Torgoljin. There, however, they found landowner Jin Bingxu with his skull smashed in.

During the investigation, the Emperor's first minister, Shi Miyuan, told the team that he had his soldiers kidnap Torgoljin and then paid Bingxu to lock her up, intending to return the princess if the Khan called off his army. Soon after, the princess ran past by the team while attempting to escape. Later, Lizong fired a cannon at the team, curious to see how the cannons worked. The team then found enough evidence to find Miyuan guilty of the murder.

Miyuan told the team that Bingxu was planning to go to the Khan himself, pretending he had rescued the princess, in order to gain a hefty reward. To stop Bingxu from jeopardizing the operation, Miyuan waited in the opera before bashing his head in with a bianzhong bell. Lizong had the guards take Miyuan away to await his full punishment, but refused to hand Torgoljin back.

Post-arrest, Orlando and the player enlisted help from opera singer Lian Wei to make Torgoljin over to look like an opera singer in order to bust her out of Chinese captivity. After getting disguised as an opera singer with Wei's makeup and Orlando's gown, Torgoljin was able to convince her sentry that she was not the princess, successfully escaping.

Meanwhile, Zara and the player went to the cannon field to find proof that Torgoljin's kidnapping was orchestrated by one man alone to abate the Khan's hatred against the Chinese. There, they found proof that another man had suggested the kidnapping to Miyuan, which (per Theo) turned out to be Ammon Bast himself. The team then set off to warn the Emperor, who insisted on standing his ground in the war against the Mongols despite knowing of Ammon's manipulation. The team then asked whether the Chinese had any allies, to which the Emperor told them to search the cannon field for Miyuan's strategy notes. The team discovered that Miyuan had allied with Japanese Shogun Yoshinobu Gojo before relaying their findings to the Emperor, who formally decreed the team to meet with the Shogun in Japan.

After all the events, the team asked Spanish explorer Santiago Sanchez to escort Torgoljin back to Mongolia. The team then talked with Kai and Penelope via Astro before heading off to Japan to help the Chinese stand their ground against the Mongols.

Santiago Sanchez
Add a photo to this gallery

Torgoljin's Sentry
Add a photo to this gallery 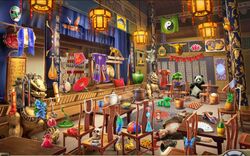 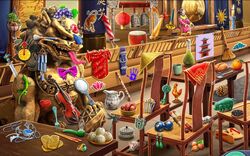 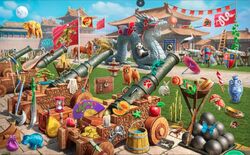 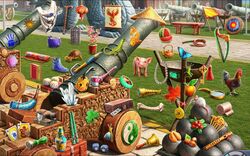 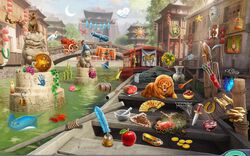 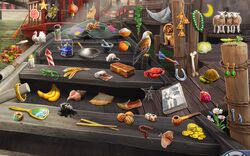 River Pier
Add a photo to this gallery

Retrieved from "https://criminalcasegame.fandom.com/wiki/For_Whom_the_Bell_Tolls?oldid=538543"
Community content is available under CC-BY-SA unless otherwise noted.