Floyd Russel was a suspect in the murder investigation of stall owner Mary Gray in The Lake's Bride (Case #27 of Grimsborough).

Floyd is a 45-year-old fisherman with brown hair concealed underneath a marble blue fisherman's hat and scratches on his right cheek. He wears a blue tropical shirt underneath a forest green bodywarmer with a mud stain and several fishing baits.

Floyd was a fisherman who played a minor role in this case since almost none of the killer's attributes matched his profile.

When Jones and the player were searching the lake after hearing about the murder of Mary Gray, they found scales inside a pile of algae. Since the team had no idea about the scales, they asked Floyd, who was fishing near the lake.

Floyd introduced himself and said that he had been fishing in the lake every single day for 40 years. When asked if he knew what kind of fish the scales had come from, Floyd was shocked and replied that the scales did not belong to any fish but the Creature of the Lake. He said that the Creature of the Lake was a mythical monster who had been living in the lake since forever. He also said that only a few people had seen it, and that sometimes, in the middle of night, the creature used to make mournful wail for trying to lead the people to the water.

The team later had to visit Floyd once again after finding his fingerprints on a claw which they had found in the outskirts of the town. After seeing the claw, Floyd was shocked and claimed that it was his. He said that his grandfather had once ripped off that claw from the Creature of the Lake and told him that the only way to the hurt the Creature was with the claw. Since then, Floyd always used to carry this claw for safety. When asked why the claw was found in the town exit where Mary was kidnapped, Floyd replied that that was the place where he had lost it while trying to save the victim from the Creature of the Lake. He told the team that he was on his way to the lake when he saw the Creature attacking Mary, and that he had quickly rushed towards the monster and hit him with the claw, but the Creature had pushed him away, and he fell unconscious. When Floyd woke up, the Creature was gone as well as the victim. 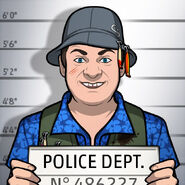 Retrieved from "https://criminalcasegame.fandom.com/wiki/Floyd_Russel?oldid=408315"
Community content is available under CC-BY-SA unless otherwise noted.