Florence Samuels was the killer of Judge Satoshi Takakura in The New Truth! (Case #55 of Mysteries of the Past).

Florence is a 23-year-old courthouse clerk. She has caramel brown hair in a chignon hairstyle and freckles. She wears a dark gray blazer with a silver leaf-shaped brooch over a beige blouse and a gray ribbon. Additionally, she is seen holding a brown clipboard in her left hand. It is known that Florence smokes, reads The New Truth and takes a sleeping draught.

Florence became a suspect when Maddie and the player discovered that she was the clerk who worked with Judge Takakura. She told them that it was strange to think that she had recently seen him at work earlier that day and informed that that the victim was an eccentric yet wise man, with a brilliant legal mind. She then said that she would have to work with another judge that she doubted would have even half the legal prowess of Takakura.

Florence was spoken to again about her disparaging of the victim during a commotion at the courthouse caused by Yuri Ishida. She revealed to them that Takakura was a nightmare to work with as he was a crotchety old man who was never satisfied with her work. She said that she took pride in her work, but the victim's attitude put her under immense stress.

In the end, Florence was revealed to be Takakura's killer. Upon admitting to the murder, Florence revealed that Mayor Lawson was her idol and that she was in love with him. When she heard Takakura accuse him of being a merciless monster, she reported him to the Justice Corps, but they were forced to let him go. Taking matters into her own hands, she waited for him while he was going home from work and proceeded to bash his head repeatedly with a hammer until he died. Disgusted that she would commit an assassination in his name, Lawson sentenced Florence to death by beheading at the town square the next day at noon, marking the first death sentence in fifty years.

Resolving to prevent the death sentence, the Squad devised a plan to break her out of prison. When the plan went underway, Rose and the player, disguised as prison guards, came for her. Despite her idolization of Lawson, Rose convinced her to come with them in order to avoid being the first person to be beheaded since the death penalty was abolished fifty years prior. At the docks, Florence thanked the player for risking their life to save her from execution, before Rose assured her that they only did it to prevent Lawson from beheading people in a fit of anger. Florence then boarded the ship and was sent to an Australian penal colony so she could serve her sentence by performing manual labor. 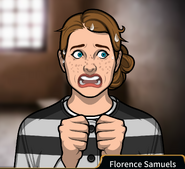 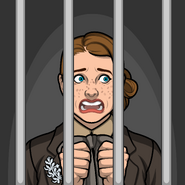 Florence, sentenced to death by beheading for the murder of Satoshi Takakura, but was later transferred to Australia and re-sentenced to hard labor for an undisclosed amount of time. 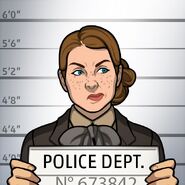 Retrieved from "https://criminalcasegame.fandom.com/wiki/Florence_Samuels?oldid=504749"
Community content is available under CC-BY-SA unless otherwise noted.