Felix Murray was the killer of power plant manager Ryan Min in Lights Out (Case #50 of The Conspiracy).

Felix is a 48-year-old hired muscle. He has long, brushed-back brown hair and stubble and sports glasses. He wears a white shirt with an orange tie under a navy jacket. Additionally, he holds a file in his left hand. It is known that Felix is right-handed, eats energy bars and plays the electric guitar.

Felix became a suspect after Gloria and the player learned (per electrician Jenna McFry) that he had inspected the power plant earlier that day. When asked if he had noticed anything strange, he told the team that the plant had been run well. Felix was then told about the murder, leading him to wonder if it was related to the blackout.

Felix was spoken to again about his true identity as a hired muscle. He revealed that he had been hired by the victim as Ryan was worried that something bad was going to happen. He told the team that the victim had seemed jumpy and explained that he thought that Ryan was merely imagining things.

In the end, it was proven that Felix was Ryan's killer. Upon admitting to the murder, Felix said that after Ryan had hired him to protect him from a power plant employee, he got a call from a "valued friend" telling him to be ready to cause a city-wide blackout on their signal. When the time came to cause a blackout, security guard Jon Benson caught his shadow and called Ryan down from the control tower. Felix then knocked Jon out and shot Ryan in the heart after the latter realized what he was doing. He then went up to the control tower, plugged his electromagnetic pulse machine into the circuits, and caused the blackout. Felix was then sentenced by Judge Powell to 35 years in prison after hinting that his friend had wanted to bring down mobile communications.

After his arrest, Felix was confronted about a cryptic message regarding Plan Supernova. He revealed that his mission was to stop the message from being sent per the blackout. When asked about the recipient of the message and its meaning, Felix refused to give them any answers. 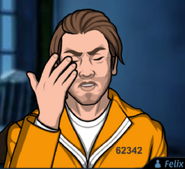 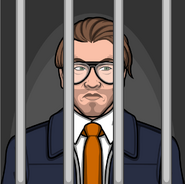 Felix, sentenced to 35 years in prison for the murder of Ryan Min and for causing a city blackout in Grimsborough. 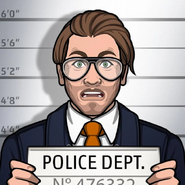 Retrieved from "https://criminalcasegame.fandom.com/wiki/Felix_Murray?oldid=465387"
Community content is available under CC-BY-SA unless otherwise noted.