Fatima Boussefi (Arab: فاطمة بوسفي) was a suspect in the murder investigation of her husband, protest leader Hamza Boussefi, in Killing Spring (Case #9 of World Edition).

Fatima is the 26-year-old Arab wife of the victim. She wears a teal shirt and a pink hijab with a floral design wrapped around her head. It is known that Fatima eats couscous, goes fishing and uses Buzzer.

Fatima became a suspect after a locket of her and the victim was found by the player and Carmen on the primary crime scene. She was shocked to hear of her husband's sudden passing, saying he was her hero as well as the people's. When asked if anyone wanted Hamza dead, she explained there were so many people who would want him dead due to his commitment to overthrow the Sultan. She went on to say the victim did not feel safe anywhere, not even the protest square where the protesters were camping out. Given that Hamza played a big role in the protest, the player and Carmen prompted to search the protest square for more clues.

Fatima was interrogated again regarding a bottle of pills found in the protest square. Lars confirmed that the pills were folic acid, a supplement recommended for pregnant women to prevent birth defects. When asked why she did not mention it before, Fatima said it did not make a difference in the case. Regardless, Fatima explained that she told the victim she was pregnant and she wanted him to stop the protests, but Hamza refused and threatened to hurt her if she tried to stop him. She was saddened that her child will grow up fatherless and will now have to take the role of both parents.

Fatima was found to be innocent after the team incarcerated Thomas Cox for Hamza's murder. But she was spoken to again regarding her husband's interactions with The Sword, Chief Ripley's killer, whom The Bureau was tracking down. She said that if it was not for The Sword, then Hamza would not have been killed by Thomas. She said the only reason she did not mention The Sword before was because she felt there was no need. She went on to say The Sword was the one who bribed Hamza into rebelling against the Sultan and overthrow him. When asked about SOMBRA she said she could not tell them anything about them, all she could tell them was that Hamza used to meet The Sword at the oasis, prompting the team to search there once again. 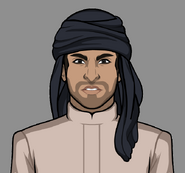 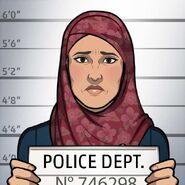 Retrieved from "https://criminalcasegame.fandom.com/wiki/Fatima_Boussefi?oldid=426701"
Community content is available under CC-BY-SA unless otherwise noted.