Father Von Pratt was a suspect in the murder investigation of manor owner Hector Fernandez in The Haunting of Elm Manor (Case #28 of Grimsborough).

Pratt is a 42-year-old priest with thick brown hair. He wears a black cassock underneath a black suit with a gold cross and a red stole. Pratt is known to use petroleum jelly.

Pratt was a priest who was interrogated after Jones and the player saw his name written on a broken mysterious device found in the church. When the team informed him about Hector's death, Pratt was shocked and said that he failed to save the victim from the possessed house. He told the team that Hector had come to him a few weeks back when he told Pratt that his house used to talk to him as it hungry for his soul. Pratt said that the victim had also told him about some truly terrifying events, but still Hector refused when Pratt begged him to move out of the house. Pratt then told the team that he had once went to the house to monitor the level of paranormal activity with his Geiger counter (the mysterious device which the team had found) and that the levels were through the roof. Pratt concluded by warning the team to stay away from the possessed house since it was full of evil.

Later, while searching the church again, the team found a string of numbers on a note in which Hector wrote, "Pay me back you fraud or experience my wrath!" After analyzing the string of numbers, Alex told the team the numbers made up a bank account which belonged to Hector. Alex also said that he had pulled up the victim's recent money transactions and discovered that Hector had placed a large sum in Father Von Pratt's personal account. This meant that the priest had been taking money from Hector, and that the victim had wrote that threat note to Pratt, who later explained to the team that Hector had called him a fraud because he had performed an exorcism that did not work on the victim's haunted house. For this reason, Hector was convinced that Pratt had cheated him and vowed that he would take Pratt to hell with him when the spirits of the house would come for him. When asked if Hector being angry had nothing to do with the fact that the victim had put a lot of money into Pratt's personal account, Pratt admitted that he had taken advantage of Hector's scared face and made the victim pay him for the exorcism. 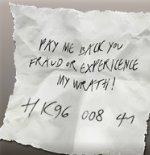 The threat note that Hector wrote to Pratt. 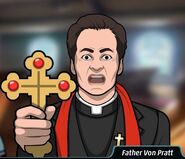 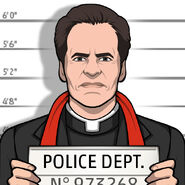 Retrieved from "https://criminalcasegame.fandom.com/wiki/Father_Von_Pratt?oldid=408276"
Community content is available under CC-BY-SA unless otherwise noted.