Falcon is the 62-year-old former mentor of Chief Arrow. He has blue eyes, long gray hair, a mustache, a beard, wrinkles and a scar across his right cheek. He wears a gray vest under a faded brown shirt with two front pockets and a cobalt blue blazer. He also carries a rifle that is strapped to his back with a black strap.

In his first suspect appearance, it is known that Falcon is right-handed, eats protein bars and uses hand warmers.

In his second suspect appearance, he sports a bandage on his nose. It is discovered that he drinks IPA and uses protective oil.

After discovering the identity of Rex Lane's killer, Chief Arrow and the player searched the set of Weirder Stuff for clues as to where Falcon was. They found markings on a tree that corresponded with a sequence of numbers. Per Hope, the numbers were location coordinates. Following the coordinates to a wooden structure, Chief Arrow and the player found Falcon, who pointed a crossbow at them. Before he would speak with the team, he demanded proof that Chief Arrow was really who he said he was.

After Chief Arrow recalled a fireball trick that Falcon had taught him, the two hugged and caught up with each other. Chief Arrow then revealed that there were demons roaming the earth, and that they were following a lead that they were in league with werewolves. Falcon informed the team that demons lived in the Netherworld and that they were ruled by a queen from whom they drew their strength. He suggested that the demons had come to Earth to consume the planet's resources and informed them that a demon could cross into the world by two ways: if they were strong enough, or if they were summoned by a human. Falcon then told the team to stay in touch with him.

Falcon became a suspect after Gwen and the player found his fingerprints on a mug in Annette's ranger cabin. He initially pointed a crossbow at the team, and when they identified themselves, Falcon rebuked the team for sneaking up on him. He claimed not to know who Annette was, telling the team that he had come across the cabin while looking for a place to sleep. Gwen then informed him about the murder and the magic tree, neither of which he claimed he knew about. Gwen then revealed that the team had unmasked novelist Arthur Darkwood as a demon, surprising Falcon, who told the team that Arthur had maneuvered the team into a trap by coming to Yellowstone.

Falcon was spoken to again about the threat he sent to Annette. He clarified that his letter was only a warning and revealed that he and Annette used to be lovers. When Annette was bitten by a werewolf, she left him in order to answer the call of the wild. Heartbroken, Falcon stopped looking after himself and became a supernatural hunter, forgetting about Annette. However, when he got wind of fellow hunter Ruth Wu's plans to hunt down Annette's pack, Falcon tried to warn her, but she laughed in his face and said that she did not need him anymore.

Falcon was found to be innocent after the team incarcerated Zeke Davis for Annette's murder. Later, Chief Arrow and the player asked Falcon for help in confronting Zeke. Falcon warned the team that it was a suicide mission, but after Chief Arrow revealed that they had no choice, Falcon suggested that they used the essence of the magic tree to amplify their weapons. He then told the player that he appreciated them for avenging Annette's murder.

Falcon became a suspect again after Luke and the player found his lock picking set in the storage room of the Smithsonian Museum. He told the team that he was doing personal research, although failed to elaborate. Luke then told Falcon about the murder, but Falcon claimed that he had nothing to do with the victim and told the team to get lost.

Falcon was spoken to again about his warning to the victim. He explained that he had warned Dan after he had opened the sarcophagus and taken the scarab amulet that had eventually killed him. He urged Dan to return the amulet to the mummy, but he refused. Falcon admitted that he had resolved to take Dan out for the greater good if need be, but the curse had gotten to him first. He then informed the team that the mummy would not rest until he got his amulet back.

Falcon was found to be innocent again after the team incarcerated Theresa Rosenthal for Dan's murder.

After discovering the demon identity of Bucky Johnson's killer, Chief Arrow and the player returned to crimelord Dr Daemon's mansion to search through Edwinata's belongings. There, they found her historic account regarding the demons. Per Felix, the account divulged that Falcon had bound the demon queen to Lily Arrow's body.

Chief Arrow and the player confronted Falcon about the account, who despite initially claiming that he had no idea what they were talking about, revealed that the account was true. He revealed that he had joined forces with demon rebel Rathimael in order to destroy the demon queen. They realized that they needed to put the demon queen in a cage that was made from a completely and utterly pure being. Unfortunately, the only creature that fitted the bill was a good fairy, which Falcon revealed that Lily was. He revealed that he had lured a vampire to drain Lily of her blood to allow the queen to be imprisoned in her body. Seven days after her death, Falcon and Rathimael exhumed Lily's body and imprisoned the demon queen, locking the cage with the five keys. In an attempt to make up for his actions, Falcon decided to become a mentor to Chief Arrow in order to prevent him from going off the rails. Chief Arrow then ordered Falcon to get out of his sight before he did something he would regret. 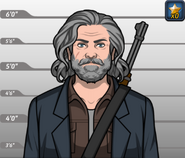 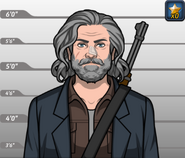 Falcon, as he appeared in Scarab to Death (Case #24 of Supernatural Investigations). 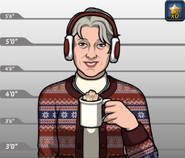 Retrieved from "https://criminalcasegame.fandom.com/wiki/Falcon?oldid=531465"
Community content is available under CC-BY-SA unless otherwise noted.