Facundo Vidal was a suspect in the murder investigation of his boyfriend, author Ernesto Cárpena, in Murder, He Wrote (Case #44 of World Edition).

Facundo is a 30-year-old tango dancer with long wavy black hair and facial hair. He wears a chest-revealing striped cranberry and black robe, a feather necklace, and three rings on his right hand. It is known that Facundo reads Jorge Borges.

Facundo became a suspect after the player and Michelle found the wine bottle he gave to the victim. When informed of the murder, he was shocked saying he was a good man who wrote with passion. According to him, the victim would sometimes work at La Boca, which was fine with him since it attracted the public, which would allow Facundo more tango classes.

Facundo was spoken to again after it was revealed he and the victim were having an affair. He only did not speak about it because the victim did not want him to. Despite doing what he could to impress the victim like reading, Ernesto never made compromises with Facundo. Despite their possible marriage being legal, the victim preferred to keep their relationship in the shadows, which Facundo was not happy about.

Facundo was found innocent after the team incarcerated Lorena Pratx for Ernesto's murder. 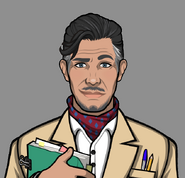 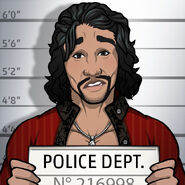 Retrieved from "https://criminalcasegame.fandom.com/wiki/Facundo_Vidal?oldid=408295"
Community content is available under CC-BY-SA unless otherwise noted.