Fabian Roland-Tavin was a suspect in the murder investigations of cheesemaker Debby Gideon in A Crime Like No Udder (Case #44 of The Conspiracy), Grimsborough PD beat cop Mia Loukas in To Kingdom Come (Case #48 of The Conspiracy) and farmer Wyatt Ewing in Winter Murderland (Case #14 of Supernatural Investigations).

Fabian is the CEO of GrimFoods, an agribusiness company. He has brown eyes, short black hair and a five o'clock shadow. He is seen wearing a white shirt with a dark red tie underneath a dark red vest and a black suit, which is adorned with an ID badge.

In his first appearance, Fabian is 37 years old. It is known that Fabian drinks switchel, has a pickup truck and uses sunscreen.

In his second appearance, it is discovered that he bites his nails and drinks Bordeaux wine.

In his third appearance, Fabian is now 39 years old. He wears a blue winter coat with a brown fur collar over his outfit. It is revealed that he eats lakeweed.

Fabian became a suspect after Jones and the player learned that he was the CEO of GrimFoods, the agribusiness the victim worked for. Already aware of the murder, he digressed about a corn crisis and the struggles his business was undergoing. Jones questioned him about his apparent absence of care about the murder, to which he responded that he had already organized for his secretary to send flowers to the funeral. Later, Fabian made a fuss when one of the rotators at the cheese workshop exploded, drenching him in cheese.

Fabian was spoken to again about his prayer for the victim to be punished. He explained that Debby was a nightmare to work with due to her crazy demands. However, he could not allow the victim to leave his business as it would affect his profits. He then fantasized about running away in his pickup truck, which Jones warned against.

Fabian was found to be innocent after the team incarcerated Tallulah Shropshire for Debby's murder. But he was later confronted by Gloria and the player about his plan to burn down the fields and sell GrimFoods' corn to farms instead. He insisted that the plan in fact belonged to AgriMeadows and that they had acquired it through espionage. After further pleading, Gloria fined him for concealing important information from them.

Fabian became a suspect again after Gloria and the player found his watch at the shack in which the killer had made the bomb that killed the victim. He told them that he had lost his watch in the shack, which was on land belonging to GrimFoods. When asked about the victim, he recalled how she carried out the audit of GrimFoods after he gave the team his file on AgriMeadows.

Fabian was spoken to again about the victim getting his son convicted for driving under the influence. Saying that he did not originally bring up his son's conviction because he failed to see its relevance, he explained that he had exchanged heated words with Mia, but had not killed her.

Fabian was found to be innocent again after the team incarcerated Brock Perry for Mia's murder.

Fabian became a suspect for the third time after Luke and the player found his note to the victim in a GrimFoods pamphlet. He revealed that he was in Montana in order to find farming opportunities that did not involve corn. He told the team that he was staying at the victim's ranch, which was convenient for him. Luke then told him about the murder, shocking Fabian since he thought that Montana would be safer than Grimsborough.

Fabian was spoken to again about the defamed GrimFoods sign. He admitted that he wanted to buy the lake in order to harvest lakeweed, but the victim refused to sell to him. When Luke implied that he killed Wyatt in order to acquire the land, Fabian threatened the team with his lawyers.

Fabian was found to be innocent for the third time after the team incarcerated Poppy Winters for Wyatt's murder. 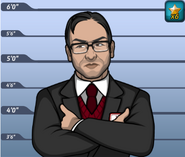 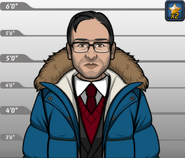 Fabian, as he appeared in Winter Murderland (Case #14 of Supernatural Investigations) 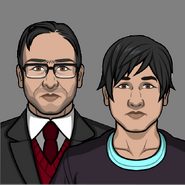 Fabian (left) with his son (right). 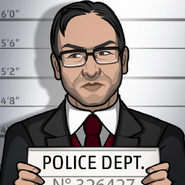 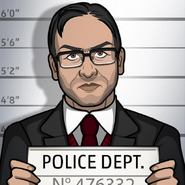 Retrieved from "https://criminalcasegame.fandom.com/wiki/Fabian_Roland-Tavin?oldid=520555"
Community content is available under CC-BY-SA unless otherwise noted.