Ezra is a 58-year-old moneylender and pawnbroker. He has long grey hair which extends to mutton chops.

In his first appearance, he wears a dark mahogany brown suit over a cookie brown vest, a white shirt, and an indigo neckerchief. He also sports a dirty brown top hat. It is known that Ezra plays the lottery and whist and snuffs tobacco.

In his second appearance, he wears a black suit jacket over a red waistcoat and a yellow ascot and sports a matching black top hat. Additionally, he is seen holding a monocle. It is discovered that he eats chili dogs, uses amphetamine and has read Clarissa Rochester's book Make a Killing in Shillings.

Ezra became a suspect after the player and Isaac found his business card in the victim's lodgings. He was surprised to hear of Rick's murder, and said he hired Rick so that people who borrowed money from him would be made sure to return it. Isaac was shocked, but Ezra said that was what they bargained for when they came to him, and felt the problems they had did not concern him. What concerned him more was the fact that he lost Rick around the busiest time of the year.

Ezra was spoken to again about a threatening note made to the victim. He said that although Rick was good at beating up debtors, he refused to hand over the money he collected from them. Plus, when he confronted the victim, he was threatened over the fact that he should have given Rick a better wage.

Ezra was later found to be innocent after the team incarcerated Trickster Tim for Rick's murder.

Ezra became a suspect again after the player and Maddie discovered that one of their crime scenes, a pawnshop, was run by him. When he first encountered them, he asked if they wanted to pawn their possessions, as his business boomed when the stock market crashed. When asked if he knew the victim, he denied knowing who he was, suggesting that he was just another of his customers that came to pawn their possessions.

Ezra was spoken to again about a libelous poster telling people to not trust Abner with their money. He revealed that Abner used to be his employee, but had suddenly quit to work in the stock market, leaving him unstaffed. He complained that he couldn't do all the work by himself.

Ezra was found to be innocent again after the team incarcerated Easton Belmont for Abner's murder. 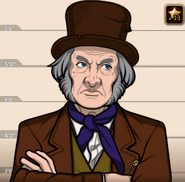 Ezra, as he appeared in A Murder Carol (Case #4 of Mysteries of the Past). 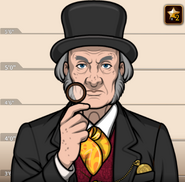 Ezra, as he appeared in Stockbroken (Case #38 of Mysteries of the Past). 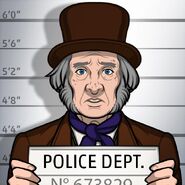 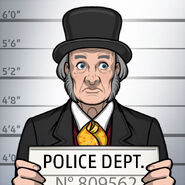 Retrieved from "https://criminalcasegame.fandom.com/wiki/Ezra_Bleak?oldid=415326"
Community content is available under CC-BY-SA unless otherwise noted.