Ezola Alldred was a suspect in the murder investigation of her ex-boyfriend, Captain Blackbeard, in A Pirate's Death for Me (Case #22 of Travel in Time).

Ezola is a 29-year-old fruit vendor and the ex-girlfriend of the victim. She has shoulder-length wavy black hair adorned with a beige and yellow flower. She wears a white short-sleeved dress under a buttoned-down, beige floral-patterned tunic. Additionally, she sports two gold hoop earrings in her left ear and a drawstring pouch across her chest. Furthermore, she is seen holding a lemon in her right hand. It is known that Ezola plays Liar's Dice and sings sea shanties.

Ezola became a suspect after Jack and the player learned that she sold oranges, which meant that she could have supplied the murder weapon. When told about the murder, she said that she was not surprised and claimed that she had no involvement with pirates. She then said that anyone could have bought oranges from her, so she was unable to help their investigation.

Ezola was spoken to again about her romantic relationship with the victim. She admitted to being romantically involved with Blackbeard and thought that he was so romantic. However, she was scorned by Blackbeard when she learned about his numerous affairs, prompting her to end their relationship.

Ezola was found to be innocent after the team incarcerated Lincoln Matuszak for Blackbeard's murder. 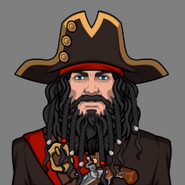 Blackbeard, Ezola's late ex-boyfriend.
Add a photo to this gallery

Retrieved from "https://criminalcasegame.fandom.com/wiki/Ezola_Alldred?oldid=497151"
Community content is available under CC-BY-SA unless otherwise noted.